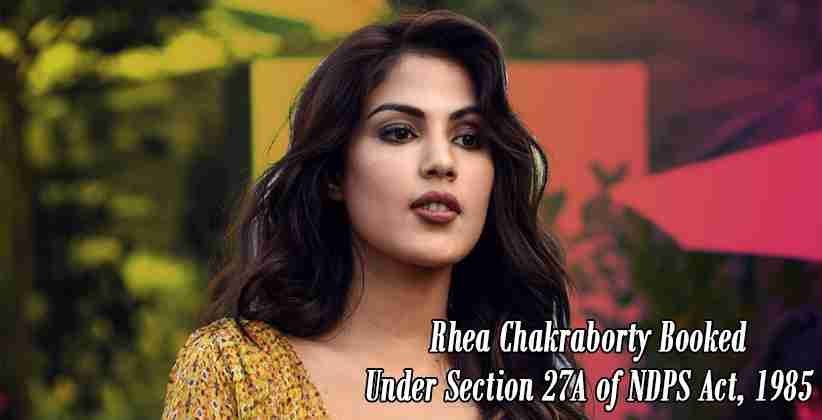 The Narcotics Control Bureau submitted their arguments against actor Rhea Chakraborty and four others on Tuesday, i.e. September 29th, 2020. The arguments were made before the Bombay High Court in the Sushant Singh Rajput case relating to alleged drug procurement. Hon’ble Justice SV Kotwal heard the matter.

Additional Solicitor General, Anil Singh, counsel for the NCB submitted that “if a person does not disclose the fact of drug consumption by another person, it will amount to 'harboring' of an offender.”. in pursuance to this point, the counsel justified the invocation Section 27A of the Narcotic Drugs and Psychotropic Substances (NDPS) Act, 1985.

Section 27 A of the NDPS Act, 1985 reads as, “Whoever indulges in the financing, directly or indirectly, any of the activities specified in sub-clauses (i) to (v) of clause (viiia) of section 2 or harbors any person engaged in any of the aforementioned activities, shall be punishable with rigorous imprisonment for a term which shall not be less than ten years but which may extend to twenty years and shall also be liable to fine which shall not be less than one lakh rupees but which may extend to two lakh rupees: Provided that the court may, for reasons to be recorded in the judgment, impose a fine exceeding two lakh rupees”.

The counsels for Rhea Chakraborty are Advocates Satish Maneshinde and Taraq Sayed contended that their client couldn’t be said to harbor him as Sushant was residing is his independent apartment. Further, they highlighted that Sushant Singh Rajput was never apprehending arrest at all.

ASG Anil Singh also submitted that “If somebody known to me is consuming drugs...consumption is illegal...and I am not telling this to anyone...not disclosing it to police...then it can be brought under the definition of 'harboring”.

Upon being questioned by the Bench on the matter whether the alleged procurement of drugs would qualify as “harboring under the NDPS Act, 1987”, the learned counsel responded by saying, “Such an act is giving protection or shelter to the drug consumer from arrest”.

The defendant’s lawyer retaliated by stating that, “If Sushant is alive today, he will be punished under Section 27 for consumption, which attracts a punishment of 6 months to 1 year. If the main beneficiary gets only that punishment, how can Rhea and Showik be charged with Section 27A which attracts 10 to 20 yrs punishment?”

ASG Anil Singh also shed light on the admission of the Chakraborty siblings to making payments for the procurement of illegal drugs, which falls under the scope of “sale, purchase, a shipment of drugs”

The High Court has currently reserved order on the bail pleas of the defendant Chakraborty siblings.