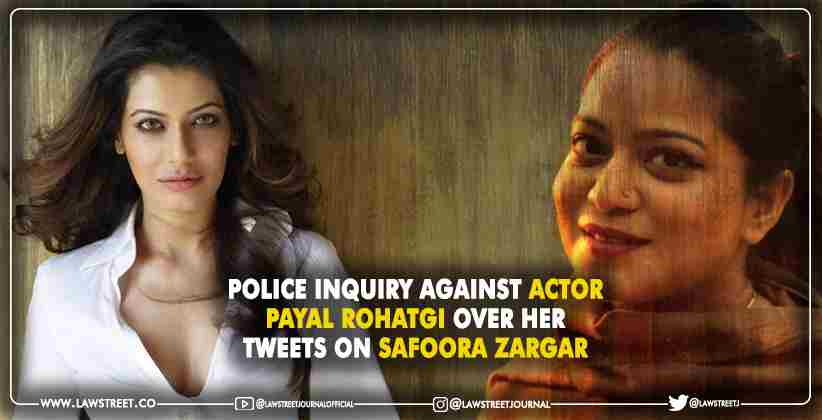 A 202 inquiry by the police was ordered by  a Metropolitan Magistrate Court at Andheri, Mumbai, against Payal Rohatgi for her tweets from June 2020, regarding the matter of Jamia Student Safoora Zargar's arrest.

Actor Payal Rohatgi tweeted in response to a post by a journalist who wished to bring awareness regarding Zargar's condition in prison, who was pregnant at the time. Zargar was an MPhil student from Jamia Milia Islamia University and was arrested for having connection with the Delhi Riots Case.

Advocate Ali Kaashif Khan Deshmukh, in the first place approached the Amboli Police for registration of an FIR regarding Rohatgi's tweets but after being refused by the police Deshmukh approached Andheri Court, in December.

Deshmukh claimed that Rohatgi's tweets spread hatred towards the Muslim community and also accused her of defaming Muslim women.

He further pleaded for Rohatgi to be booked under sections 153(A) (Promoting enmity between different groups), 153(B) (Assertions prejudicial to national integration), 295(A) (Deliberate acts to hurt religious feelings), 298 and 505 of the Indian Penal Code, 1860 and sections 67 and 67A (punishment for publishing obscene material) of the Information Technology Act, 2000.

On Tuesday, 30th March, 2021, an order was passed by the  court under section 202 of the Crpc, the police may be ordered by the court to conduct investigation of the matter before proceeding against an accused. The police has also been ordered to submit a report by Friday, 30th April 2021.

The magistrate also noted that the investigation was necessary because a mandatory 65B certificate under the IT Act was missing from the complaint.