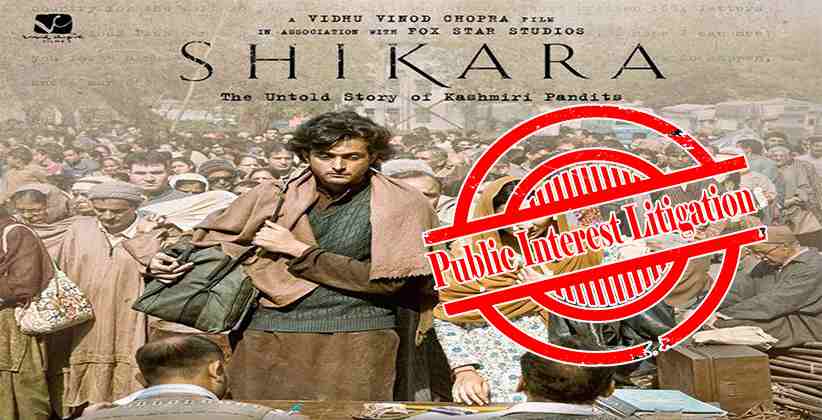 On February 4, 2020 a Public Interest Litigation (PIL) was filed in Jammu & Kashmir High Court by Iftikhar Misgar, Majid Hyderi and Irfan Hafiz Lone who alleged that the film ‘Shikara’ portrays untrue facts about Kashmir and Kashmiri Pandits. Petitioners have requested the court to put on hold the film release which is scheduled for February 7, 2020.

Later, on the evening of February 4, 2020, ‘Shikara’ film makers responded through their official twitter handle by saying that they have not received any notice from the court regarding any petition but still after getting information from the media about the petition filed in Jammu & Kashmir High Court against film, they have asked their counsel Harish Salve to take ‘appropriate steps as may be required’.

Shikara, starring Aadil Khan and Sadia as the lead pair, is set against the backdrop of the Kashmiri Pandit exodus from the Kashmir Valley in late 1989 and early 1990, in the wake of violent Islamist insurgency. This film is directed and produced by Vidhu Vinod Chopra and film is written by Vidhu Vinod Chopra, Rahul Pandita and Abhijat Joshi.

On the morning of January 7, 2020 the trailer of the film was released. After which many people criticised the trailer by saying that film portrays untrue facts about Kashmir and Kashmiri Pandits. Later Rahul Pandita, one of the writers of the film, had said on a January 21, 2020 tweet, “I am a Kashmiri Pandit who lost everything in 1990, while you were doing God knows what in Bombay. I am the writer of #Shikara and I would not let anyone compromise on the Pandit story. I will not betray the memory of those who fell to the bullets of radical Islamists.”

Do’s and Don’ts Of The Indian National Flag