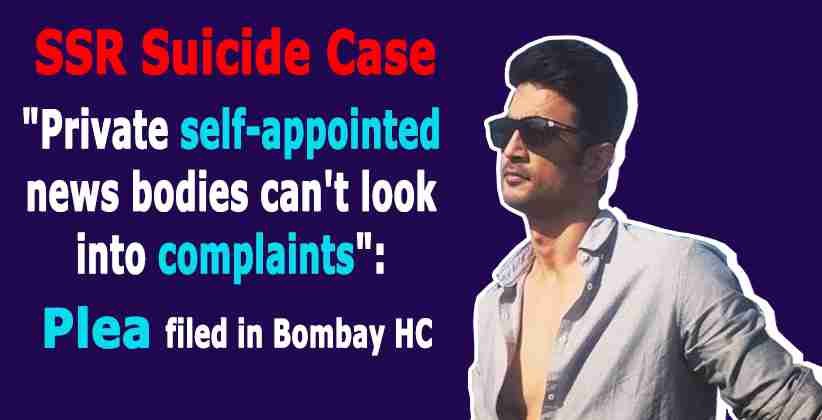 As the time is passing the Sushant Singh’s suicide case is getting more and more complicated. Media has played a very important role and that role is now being challenged in Bombay High Court by a bunch of petitions alleging the media trial in the SSR’s suicide case.

The pleas were filed by Nilesh Navlakha (filmmaker/producer) Mahibub D. Shaikh ( editor of a regional newspaper) and retired civil servant Subhash Chander Chaba, claiming that the press has been conducting a "media trial" into the case, ascribing roles and presuming the guilt of the accused persons, thus hampering a fair probe and trial into the matter.

Before this hearing, Advocate Aspi Chinoy in previous hearing argued while citing various instances from SSR’s death case that pre-judging in a criminal case violates principles of a fair trial.

On Monday 12th October the Bombay High Court was hearing the petition and Advocate Devdatt Kamat was representing the plea.

He started his arguments by stating referring section 5 of the Cable TV Network (Regulation) Act, 1955, and submitted that “the statute is very clear. The said provision states that no person shall transmit or re-transmit through a cable service any program unless such program is in conformity with the prescribed program code.”

The bench asked about the source of guidelines on which Adv Kamat answered that “the source flows from the Cable TV Networks Act itself. Therefore, the airwaves have to be used abiding by the union's guidelines as the airwaves are public, not private property.”

Adv Kamat, to support his arguments relied on the judgment of the Supreme Court in Ministry Of Information & Broadcasting vs Cricket Association Of Bengal and said “When the complaints regarding the media trial that took place in the Sushant Singh Rajput death case came up, the Government itself sent these complaints to private organizations like News Broadcaster's Association & News Broadcasting Standard's Authority.”

Questioning to a statement made by Republic TV that is "I say that being one of the most reliable leading media houses in the country, the answering respondents take the practice of ethical journalism very seriously, however, it is pertinent to mention that the answering respondent is not a member of the News Broadcaster's Association, accordingly, any code of ethics, broadcasting standards and code issued by NBA do not apply”, Adv Kamat said “The Government sends all these applications before NBA! Total non-application of mind on the government's part.”

In regard to this, the court asked “Is it a member of any self-regulatory body?”

Following this, Adv Rajesh Inamdar said "There is a new story behind the constitution of this new federation... The NBA has passed an order against Republic TV and directed them to comply with the order. The channel instead formed a new federation with some new channels. So tomorrow if any channel has some disagreement with NBA or NBF, they will form their own association. In these circumstances, the Union cannot simply forward complaints to a private body."

The court then asked “is there any mechanism to enforce orders by NBA or NBF?

Adv Kamat replied “Article 19(2) will be a bar. Only the State can enforce this. No delegation can be done and no private organization can curb freedom of speech. How can the Union abdicate its own obligation and say that private self-appointed organizations will look into this egregious conduct against channels in the Sushant Singh case? It is prima facie evidence from the headlines that there has been a violation.”

He added "Some snippets in rejoinder to show plainly media trial in Sushant Singh Rajput's death case. There is a violation of the Programme Code. The Union must step in and take action. A media trial of this kind is in direct connivance with Article 21 of the Constitution."

Adv Kamat said “These recommendations sum up the law in terms of what constitutes a media trial. Till a new law is framed, the existing regime has to be made effective.”

He questioned “ This whole theory of murder was propounded for four to five months on National TV. Now since the AIIMS report rules out the murder, speculation regarding the same will pass but what happens to the months of slander?” And referred to the Aarushi Talwar case, and said the Supreme court had observed in the said case that trial by press and media is "the very antithesis of the Rule of Law.”

He urged that “there is leakage of information by agencies like CBI and ED. This becomes even more serious. How are these channels getting access? This would clearly interfere with the administration of justice.”

Additional Solicitor General Anil Singh, appearing for Union of India was then questioned by the court regarding no action taken by the Union on complaints received in this case.

The bench noted “Who can impose the penalties as it is not clear. We would presume it is the Ministry to whom the recommendation is sent.”

Considering the submission made by Adv Kamat the court asked, “Who enforces the order?”

ASG replied that “there are other mechanisms adding that all this is to ensure that media is not controlled by media, that the nature of the medium remains independent.”