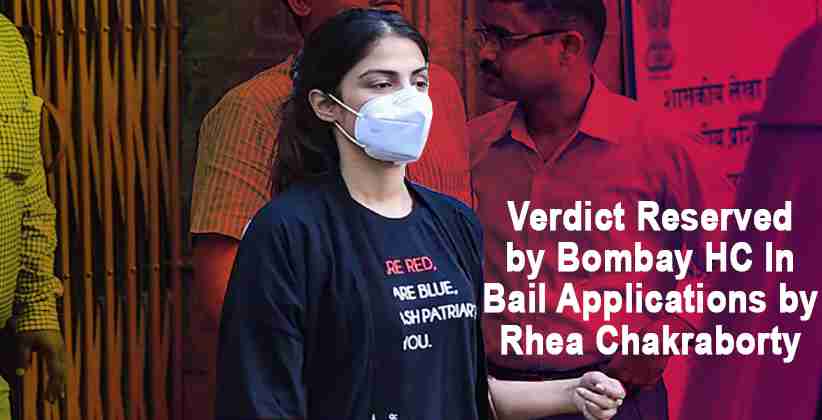 After the bail application filed by Rhea Chakraborty, Showik Chakraborty, Abdel Basit Paihar, Samuel Miranda, and Dipesh Sawant was rejected by the Special NDPS Court, Mumbai, the Bombay High Court reserved its judgment in the matter related to their alleged involvement in cases registered under Narcotics Drugs and Psychotropic Substances (NDPS) Act, 1985.

Justice SV Kotwal said, “This judgment has wide reach and repercussions. I will try to write separate orders in all matters”. Justice Kotwal said that the case of State of Punjab V. Baldev Singh could become an important precedent and help in deciding the case. In Baldev Singh case the apex court observed that Section 37 of the NDPS Act, 1985 makes offenses under the Act cognizable and non-bailable.

The HC further asked the counsel to examine this case and address the court whether the offenses for which the applicants have been charged are bailable or not. The court said that since the aforementioned ruling is done by the constitutional bench of SC, it has authoritative value and is binding on the court.

Advocate Satish Maneshinde appeared for Rhea and his brother Showik Chakraborty and Advocates Tariq Sayyed, Subodh Desai and Rajendra Rathod appeared for the other 3 accused. The petitioner side submitted and said that NCB has no jurisdiction to carry out this investigation as the apex court gave the investigation to CBI and the petitioners were arrested subsequently to investigate the drugs allegedly supplied to Sushant, hence the matter to be investigated by CBI only. The advocates further submitted that for punishment under Section 27A the necessity is “financing illicit trafficking of drugs and harboring offenders” and NCB doesn’t have any concrete evidence to prove that the accused had drugs in their possessions.

They also said that alleged offenses are bailable as to determine the severity of punishment under the NDPS Act the quantity matters and in the present case a very small quantity is involved and it is far less than the commercial quantity. It was also said that the statements recorded under Section 67 of the NDPS Act became corroborative moments after the actor’s death. For accused not charged under Section 24A, the advocates said that they were only servants employed by Sushant and NCB had no evidence to prove their relation from drugs.

Appearing for the NCB ASG Anil Singh said that drug abuse has larger ramifications on the society and it is above murder and it affects the youth severely and the whole country suffers. He further said that NCB has proved that the accused are a part of a bigger syndicate and all the accused till now are connected with each other but there was a regular link of purchasing and the case should be considered as a whole and also there was harboring and financing of drugs.

It was further submitted that this drug supply is not limited to Rajput but it is connected to a very large cartel and the drug abuse has to be controlled throughout the country. He further said that only some part of this case is related to Sushant Singh Rajput and other than that it is a nobody’s case and also the CBI has not come forward saying that NCB shouldn’t investigate. He also said that punishments under the NDPS Act are not based on quantity in every case.