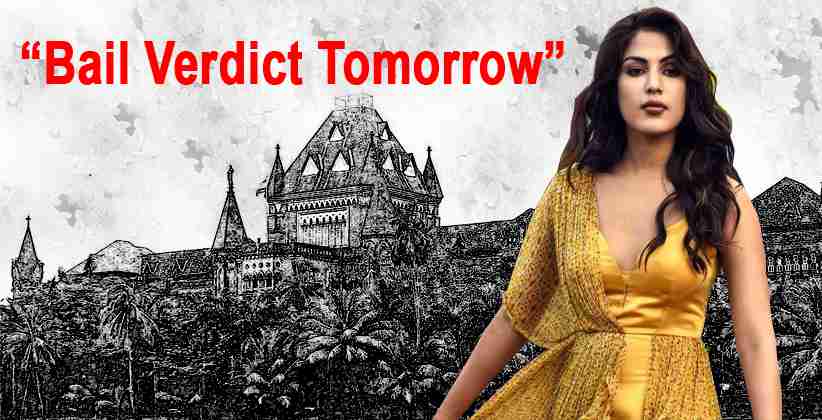 The Bombay High Court has announced that the verdict in the bail applications that were filed by Rhea Chakraborty, her brother Showik, Chakraborty, Dipesh Sawant, Samuel Miranda, and Abdel Pariha will be pronounced tomorrow, i.e. October 7th, 2020.

Section 8 of the NDPS Act, 1985 deals with Prohibition of certain operations.

Section 20 (b)(ii)(a) of the NDPS Act, 1985 reads, “Whoever, in contravention of any provision of this Act or any rule or order made or condition of licence granted thereunder, produces, manufactures, possesses, sells, purchases, transports, imports inter-State, exports inter-State or uses cannabis, shall be punishable,— where such contravention relates to sub-clause (b) and involves small quantity, with rigorous imprisonment for a term which may extend to 2 [one year], or with fine which may extend to ten thousand rupees, or with both”

The biggest assertion by the Narcotics Control Board was that when a person does not disclose the consumption of drugs by another person, according to 27 A of the NDPS Act, 1985, it amounts to harbouring an offender.

Countering the contentions of the counsel for Chakraborty siblings, ASG Anil Singh submitted that, “if somebody known to me is consuming drugs and I know that consuming drugs is illegal, I am still not telling this to anyone not disclosing it to police then it can be brought under the definition of 'harbouring'(under Sec 27A)".

Advocate Taraq Sayed contradicted the NCB case  and stated, “NCB is a premier investigation agency. They have better things to do than arrest people with a few grams of charas or ganja. 19 college students have been arrested and NCB is projecting as if a drug cartel has been busted. They (NCB) are only playing with the sections. There are no specific allegations to show that I am part of a big drug syndicate.”