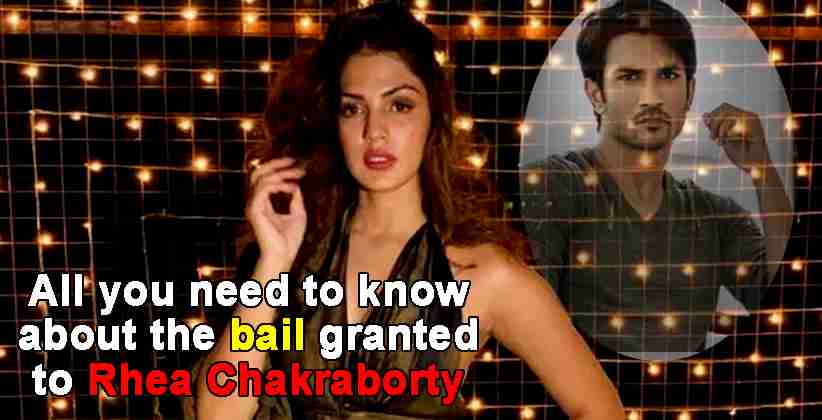 A single-judge bench of Hon’ble Justice SV Kotwal of the Bombay High Court has granted bail to Rhea Chakraborty, Dipesh Sawant, and Samuel Miranda in the case that was registered under various sections of the Narcotics Drugs and Psychotropic Substances (NDPS) Act,1985 by the NCB. This case by the NCB was in relation to the demise of late actor Sushant Singh Rajput.

There were two more accused in the NDPS case whose bail has been rejected. The bail applications of Rhea Chakraborty’s brother Showik Chakraborty and Abdul Parihar was rejected.

The bail application of Rhea Chakraborty was subject to a PR Bond of INR 1,00,000 among other stipulated conditions. Another condition attached to her bail application is that she appears in the nearest police station every day for 10 days after being released on bail. According to her approved bail, the Bollywood actress is restricted from leaving the country.

The other accused whose bail application was approved i.e. Dipesh Sawant and Samuel Miranda have to agree to pay a PR Bond of INR 50,000 each. The passports of the accused have been impounded as well.

ASG Anil Singh appeared for the NCB. The learned counsel for the NCB requested a stay on the order’s operation but his request was rejected.

The counsel appearing for Rhea Chakraborty, Advocate Satish Maneshinde’s request for 1 month of time to furnish the bail bond of INR 1,00,000 was approved by the court. Rhea Chakraborty, Showik Chakraborty, Abdel Basit Parihar, Samuel Miranda, and Dipesh Sawant had filed for bail before the Bombay High Court after the Special NDPS Court in Mumbai rejected their bail plea.

The Chakraborty siblings and the other accused were filed for procuring drugs for the consumption of Late actor SSR. On September 29, 2020, Hon’ble Justice Kotwal heard all the 5 bail applications together beyond the usual working hours of the court.

The counsels for the accused Advocates Satish Maneshinde, Tariq Sayed, Subodh Desai, and Rajendra Rathod contented the following reasons for the grant of bail:

“1. The Narcotics Crimes Bureau (NCB) had no jurisdiction to investigate in this matter because of the Supreme Court order of August 19, 2020, to hand over all investigations pertaining to the death of actor Sushant Singh Rajput to the CBI.

2. Even if NCB had jurisdiction, the offences that were charged on the accused were of a bailable nature. On this aspect, the counsel added that the quantities of the substance allegedly involved in the matter were small, and not commercial.

3. The charges against the accused under Section 27A of the NDPS Act were not made out with supporting evidence.”

On being arrested by the NCB for the offences alleged under the NDPS Act, 1985, the accused made a remand application for judicial custody. The Additional Chief Metropolitan Magistrate at the Esplanade Court granted 14 days of judicial custody over the accused.

After the refusal of bail from the Special NDPS Court, the accused filed individual bail applications submitting 51 grounds for seeking bail before the Bombay High Court.