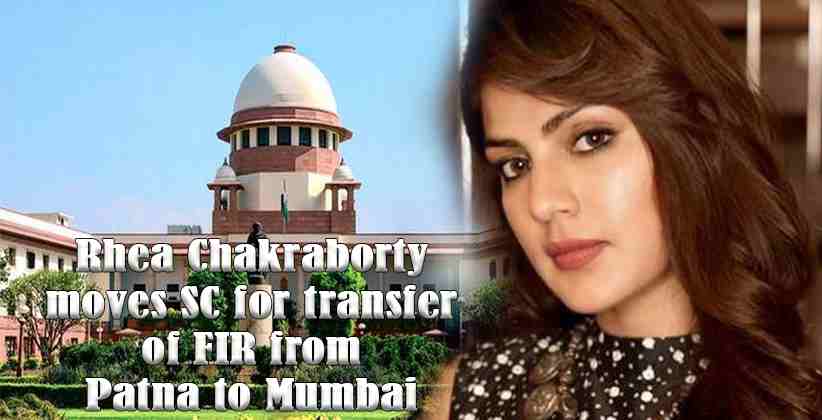 On Wednesday, 29th July 2020 Bollywood actress Rhea Chakraborty moved the SC for the transfer of the FIR from Patna to Mumbai and the stay on the investigation by the Bihar Police on the allegations of Sushant Singh Rajput’s father that she abetted the suicide of his actor son.

On 14th June Rajput at 34, hanged himself at his Mumbai Apartment in Bandra and since then police have been probing the case keeping in mind various angles.

The four-member probe team of Bihar police is already in Mumbai and may seek to interrogate the actress. The FIR lodged at Patna by Rajput’s father, KK Singh, contained allegations of severe criminal offenses such as abetment of suicide and criminal breach of trust under the IPC.

Advocate Satish Maneshinde is representing Chakraborty, he has filed a petition in the apex court seeking transfer of the case from Patna to Mumbai where the probe in the death case of actor Sushant Singh Rajput is going on.

Maneshinde said Chakroborty has also sought a stay on the probe by Bihar Police on the FIR lodged by Rajput’s father till the disposal of her plea in the top court.

After four days of actor Rajput’s death, his father KK Singh lodged a FIR at Rajiv Nagar Police station in Patna against Chakraborty and six others, including her family members, accusing them of abetting the actor’s suicide.

Mumbai police have been questioning various producers and directors like Mahesh Bhatt, Sanjay Leela Bhansali, Aditya Chopra, and others to know the reasons behind the untimely demise of the 34-year-old Rajput, which suddenly took a turn after Rajput’s father lodging the FIR against his rumoured actor girlfriend Rhea and six others.

Rhea has recorded her statement with the Mumbai Police.

Several political facilities and leaders and film personalities have demanded a CBI probe into his demise.

Rajput’s death has also questioned nepotism and favouritism in the Hindi film industry. Several top production houses boycotted the actor causing him to end his life.