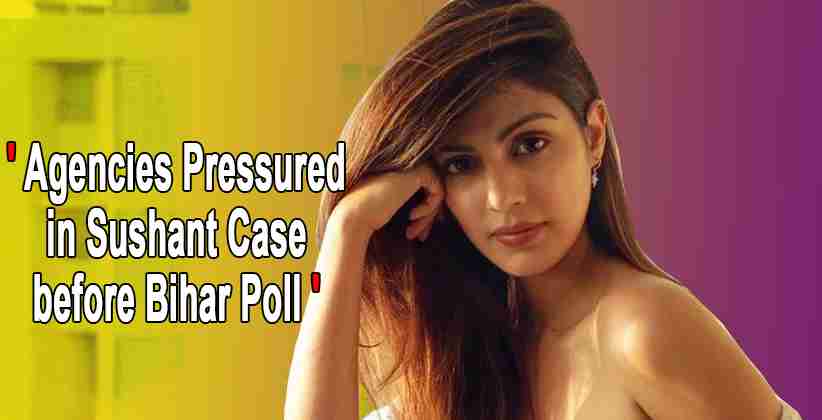 A battle of words is going on and off between Actor Rhea Charkraborty’s advocate Satish Maneshinde and Sushant Singh Rajput’s family counsel and senior advocate Vikas Singh over the investigation procedure of the Late actor Sushant Singh’s death mystery. Advocate Singh has questioned regarding the facts about why CBI is delaying the case to get registered as a murder and not a suicide as he claims that the doctor of AIIMS clarified to him the actor died due to strangulation and not by suicide.

Responding to the claims by Advocate Singh, Maneshinde told that the CBI is constituting a new medical team to avoid any kind of interference and to keep the investigation impartial. He further added the claims made by Singh could be linked up to the upcoming Bihar election. He further argued that the agencies are being pressurized to provide a predetermined result in the eve of the Bihar election as the whole case is turning to be political propaganda. He pointed out the incident of VRS taken by the DG of Bihar who was investigating the Sushant’s case and also emphasized such a thing should be in a repetitive mode.

Advocate Vikas Singh complained about the CBI’s work and not registering the case under Murder case whereas he had received substantial evidence from the forensic team of AIIMS which clearly suggests that the actor’s death was a murder conspiracy. He also added in his arguments that CBI is making a press conference and provide the details of the ongoing investigation to the general public. Addressing to the Press, Advocate Singh said that the family of the late actor is disturbed as the case is now taken turns into a drug abuse case of the B-town Celebrities, Though it has been more than three months, no such developments are there to find out the actual reason of the death of the actor.

While Singh Was claiming again and again about the actor being murdered on the basis of Forensic statements, Dr. Sudhir Gupta, the chief of the AIIMS forensic team who was examining Sushant’s death case denied such claims and said no conclusion can be driven out of being homicide or suicide on the basis of a ligature mark or scene of the occurrence until and unless it is 200% proven.