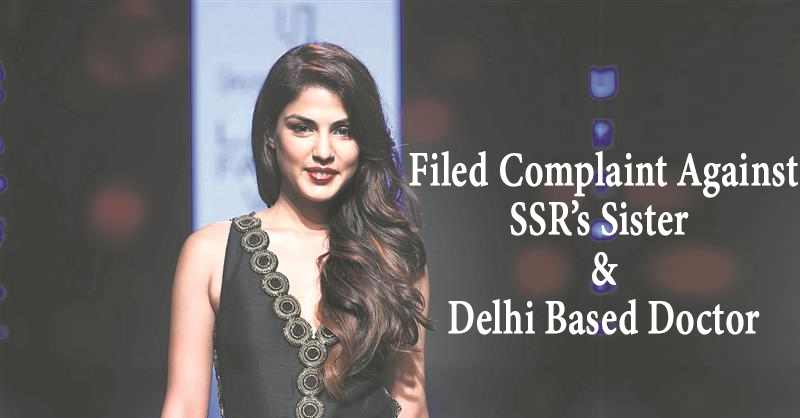 In a new twist in the case involving the death of Sushant Singh Rajput, his live-in-partner Rhea Chakraborty has filed a police complaint against the actor’s sister Priyanka Singh and a Doctor from Delhi Dr. Tarun Kumar for forgery and sending a bogus prescription.

Rhea has filed the complaint at the Bandra police station, copies of which have been sent to Mumbai Police Commissioner Param Bir Singh. As per the reports, the complaint is based on the Whatsapp texts between the actor and his sister from June 8.

Complaint made by Rhea states that "I say that during the course of my relationship with the Deceased, the Deceased had been undergoing treatment for various mental health issues and had been diagnosed as suffering from Bipolar Disorder by multiple renowned doctors. However, the Deceased was not disciplined in respect of his treatment and would often abruptly stop his medication to the dismay of his doctors and myself.”

“Sushant died merely five days after obtaining the prescription in which he was unlawfully prescribed psychotropic substances,” Rhea said in her complaint.

“It is imperative that the actions of Priyanka Singh, Dr. Tarun Kumar, and others be investigated and that it be determined as to how they came to provide the deceased with such a bogus and unlawful prescription,” she added.

The complaint made by Rhea further states that "It has now come to light that his sister Priyanka had subsequently on the same day one ham a prescription by one Dr. Tarun Kumar, an Associate Professor of Cardiology from Dr. Ram Manohar Lohia Hospital, New Delhi. I say that prima facie the said document appears forged and fabricated. In addition, the said Dr. Tarun Kumar appears to have prescribed medication controlled under the Narcotic Drugs and Psychotropic Substances Act, 1985 to the Deceased without any consultation as mandated by Law. In fact, the drugs prescribed by Dr. Kumar were prohibited from being prescribed electronically under the Telemedicine Practice Guidelines issued on 25th March 2020, which constitutes Appendix 5 of the Indian Medical Council (Professional Conduct, Etiquette and Ethics Regulation, 2002).”

As per the reports, from the chat retrieved, it appears that Priyanka Singh asked Sushant Singh Rajput to take Librium for a week, Nexito every day, and Lonazep for whenever there is an anxiety attack.

“Rhea Chakraborty has filed a Police Complaint before the Mumbai Police against Priyanka Singh, Dr. Tarun Kumar of Ram Manohar Lohia Hospital and Others for offenses of Forgery, NDPS Act and Tele Medicine Practice Guidelines 2020 for having sent a bogus Medical Prescription depicting SSR as an Out-Patient Department person when he was in Mumbai on 8th June 2020 prescribing Schedule Drugs which are listed in Schedule of NDPS Act listed at items 36 and 37 as Psychotropic Substances and Tele Medicines Practice Guidelines 3.7.4 dealing with Prohibited List, which prohibits prescribing of any Narcotic or Psychotropic Substance listed in the NDPS Act. It is misconduct under 3.7.1.4 of the Tele Medicine Practice Guidelines,” Rhea’s lawyer advocate Satish Maneshinde shared in a statement.