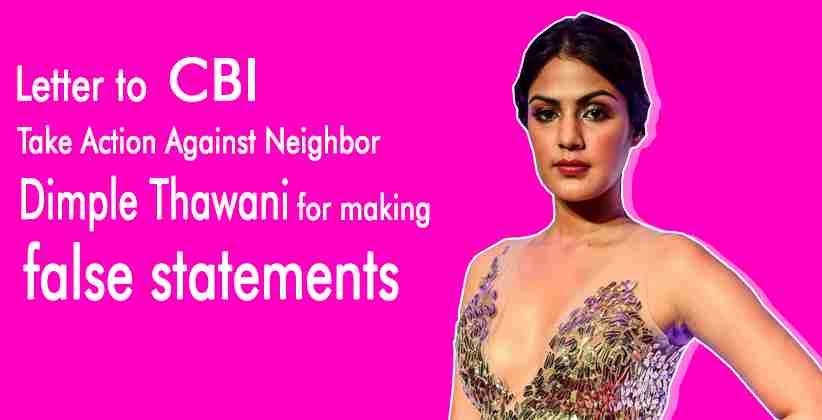 Rhea Chakraborty after getting bail writes a letter to CBI urging to take action against Dimple Thawanim, her neighbor for making false and misleading allegations against her. Dimple Thawani had claimed before that the late actor dropped Rhea home on June 13th, 2020, the day before the actor was found dead. Rhea wrote the letter addressing Nupur Pandey, Superintendent of Police, SIT, CBI, Mumbai.

She wrote that she was investigated for more than 5 days by the CBI in connection with the death of Sushant Singh Rajput and during that media channels carried false and bogus charges and stories without any proofs for the same in order to achieve their own ends and contributing to the same Mrs. Dimple Thawanimade false allegations knowingly and mislead the investigation. Dimple Thawani alleged that the late actor dropped me on June 13th, 2020 which is false.

She also said that this should be punishable under Section 203 and 211 of the Indian Penal Code, 1860, one of which is punishable with imprisonment for up to 7 years. The allegations were made on the Republic T.V and also I’m ready to record my claim. “I say that I would therefore request you to take cognizance of the same and initiate appropriate action according to the law”, said the actress.

According to Section 203 of IPC, if any person gives any false information regarding an offence knowing that the information is false, the person should be punished for a term of a maximum of two years or with a fine or with both and according to Section 211, if charges are been made to injure then knowing that charges are false, he will be punished for a term of maximum up to 7 years or with fine or with both.

Chakraborty is accused of abetment of the suicide of Sushant Singh Rajput, investigated by the CBI currently. On October 3rd, 2020 AIIMS doctors in their opinion to the CBI told that it was not a murder but was a suicide. Rhea was arrested by the NCB on September 4th, 2020 as it was alleged that she facilitated the procurement of drugs.

The actress was under the custody of CBI till October 5th, 2020, when the Bombay High Court granted her bail. The HC observed that there were no prima facie reasons or evidence to believe that the actress was guilty of any offense under the NDPS Act, 1985 as alleged by the CBI.