Home Celeb Street “Everyone has an opinion about High Profile Cases, but we will proceed as per Law”: SC states while refusing a stay on investigation against Rhea Chakraborty
Celeb Street 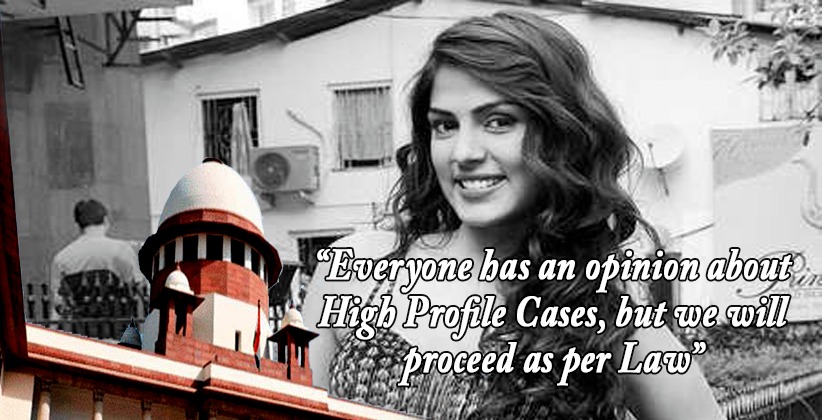 Amidst the ongoing tension in the sensational matter of the unfortunate demise of Sushant Singh Rajput, today  (August 5,2020), the Supreme Court has dismissed the Bollywood actress Rhea Chakraborty's plea seeking a stay on the investigation by the Bihar police against serious allegations of abetting suicide and fraud by Sushant Singh Rajput's father. The bench is headed by Justice Hrishikesh Roy.

The bench has refused the stay on the probe by the Bihar Police against the actress stating that,

“Serious allegations have been leveled against Petitioner…Rajput was a talented artist who passed away under unusual circumstances. Now whether there is criminality involved needs to be investigated”

The actress had approached the Supreme Court after a team of Bihar Police came to Mumbai to investigate and interrogate Rhea against an FIR lodged by Sushant’s father including serious criminal charges of abetting the suicide, cheating, and fraud.

In her plea, filed through the Sr. Adv. Shyam Divan, the actress has sought transfer of an FIR, lodged against her in connection with the death of actor Sushant Singh Rajput, from Patna to Mumbai and stay on the investigation by the Bihar Police. She has even alleged that the charges involving - abetment of suicide and cheating against her is part of a conspiracy between the Bihar Police and the actor’s father. The Senior Advocate said that, since the whole incident happened in Mumbai, immediately after Sushant's death, Mumbai Police started the investigation and questioned about 56 people, so the responsibility of investigation is with Mumbai Police.

In response to the application filed by Rhea, Sr. Adv. Vikas Singh on behalf of Sushant’s father argued that since there has been no complaint registered in Maharashtra, therefore, as per section 174 of the CrPC, only Bihar Police has the authority to investigate in the present matter. He even mentioned the suspicion that the Maharashtra Police might as well destroying evidence in the case.

On July 25, the Bihar Police had registered an FIR for an investigation against the complaint lodged by Sushant’s father alleging Rhea Chakraborty for abetment of suicide, cheating, and criminal breach of trust under the IPC. The police have booked Rhea under Sections 341, 342, 380, 406, 420, 306, 506, and 120(B) of the Indian Penal Code for the investigation.

Meanwhile, the Centre today has accepted Bihar Chief Minister Nitish Kumar's recommendation for a CBI probe into the untimely death of Sushant at the request of his father, Krishna Kishore Singh. SG Tushar Mehta on behalf of the Centre has submitted that the notification for the CBI probe in the matter will be released by the end of the day.

According to a tweet posted by PTI, the Supreme court has said that whatever may be the present course of the Sushant Singh Rajput death case, the truth shall ultimately prevail.

Ban On Export Of Ventilators Lifted By The Government