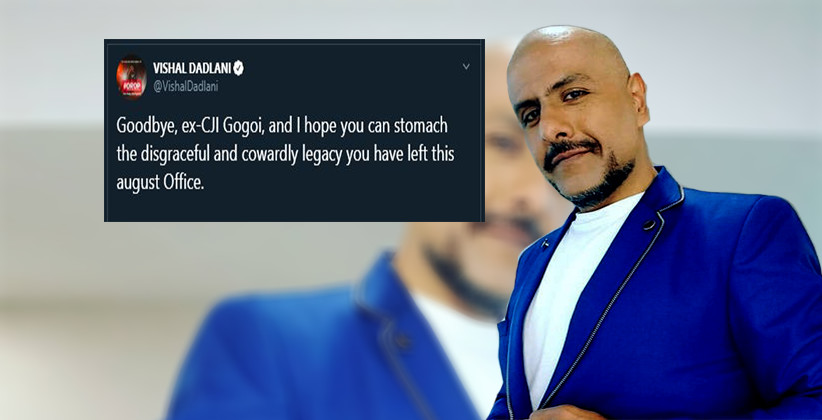 Music composer Vishal Dadlani has again landed himself in a legal soup over a tweet on former Chief Justice of India Ranjan Gogoi’s retirement.

"Goodbye, ex-CJI Gogoi, and I hope you can stomach the disgraceful and cowardly legacy you have left this august Office," Dadlani had tweeted.

The derogatory tweet did not go down well with Twitteratis who started criticizing the music composer on social media.

One social media user wrote: “Absolute misuse of freedom of free speech. This is a Constitutional Tort. Courts must award realistic damages atleast for such statements.”

“This is very shameful. He is the CJI of India. If someone disrespecting him means he is disrespecting the Indian constitution. And this fellow Vishal has proved to be terrible offender many times,” another user wrote.

Expressing their opinions, netizens demanded that Dadlani should be sacked from the popular TV reality show.

“After passing disgusting and offensive comments against our CJI, how can he be allowed to judge our children?” a user wrote.

This is not the first time that Dadlani has caught himself in trouble, in April this year, the Punjab and Haryana High Court has imposed fine of Rupees Ten Lakhs on him for 'insulting' Jain Saint Tarun Sagar in a series of tweets in 2016. The Supreme Court, however, on September 2, 2019, stayed the High Court’s order.