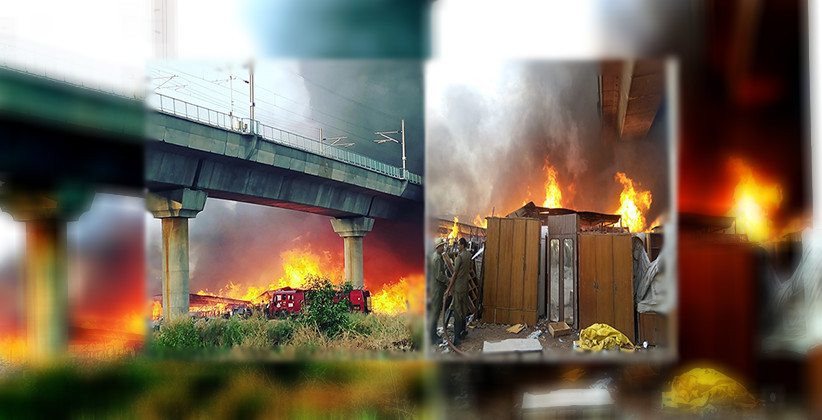 In the wee hours of Friday (June 21, 2019), a fire broke out in a furniture market in Delhi's Kalindi Kunj near Metro Station. About 30 shops were burnt to ashes amounting to a loss of lacs, the fire even impacted the metro pillars. Pillars 205 and 206 were partially damaged that halted the line for some time.

Chief Fire Officer Atul Garg received a call about the fire around 5:25 in the morning. He dispatched 4 fire tenders to the spot, but the flames refused to subside. Sensing danger, 13 more fire tenders were sent to fight the fire. Garg briefed the topography of the area spreading in 2 thousand square feet where this market sprawls. 60 firemen displaying an act of bravery had to battle for two hours to bring the flames down. The fire spread very fast due to the timber around and flames leapt skyward that made the work all the more difficult. There was no casualty reported except that a part of the metro pillar was affected by fire and the track turned black which brought the metro services to a halt. The track will be operational again only after the probe in this regard is over. For the time being, the metro rail will stay off track on the line connecting Jasola Vihar, Shaheen Bagh and Kalindi Kunj. However, it's expected to revive soon. The commuters had to face problem owing to this.

The cause of the fire is yet to be ascertained but the shopkeepers are indicating short-circuit as the reason. Some gathered around the scene held the fire department responsible for reaching the spot an hour late, the damage wouldn't have been colossal enough had they responded to the call quickly.

As per the sources, each of the shops there had goods (furniture pieces) worth rupees somewhere between 25 and 30 lacs. This tragedy rendered many jobless as this was the only means of survival to many of them, they could foresee tough times befalling them in days to come. They demanded the government to grant some compensation as a support so that they could pick up the scattered pieces of life and weave the yarn of their journey again.

Shimla May Be Renamed Shyamala