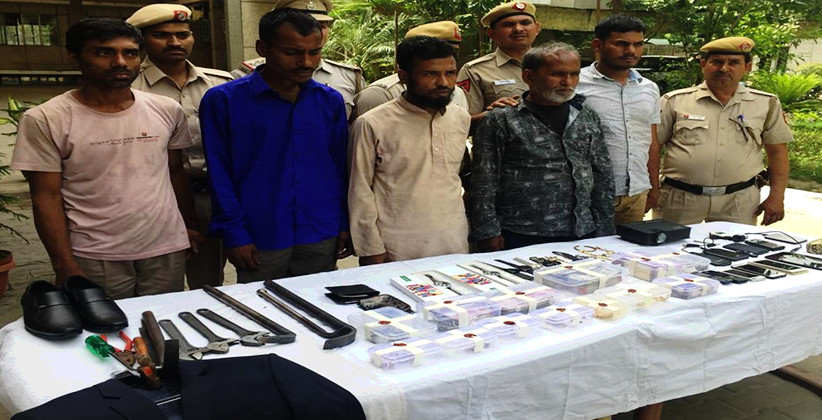 The staff of police station Amar Colony busted a gang of burglars and arrested five members of the gang. The gang was said to have been operating in the area for some time. The modus operandi was that they recceed the target, broke in, burgled and transferred the stolen cash to their relatives in Bangladesh.

Working day in day out on a complaint lodged by one shopkeeper at PS Amar Colony with a case vide FIR no. 155/19, under Sections 454 and 380 of the Indian Penal Code, 1860, the police reached the arrest after a long chase.

The CCTV footage was examined that eventually led to the arrest after developing a lead in this connection. The police nabbed them from Sarai Kale Khan near Hazrat Nizamuddin flyover.

Mehmood worked as a car cleaner whereas his wife as a domestic help, he while working carried out a recce before targeting the houses.

"The gang would prefer the day to commit the crime, one of the members stayed out of the targeted house to keep a watch around. After the execution of crime, they would decamp with the items burgled and reassemble at Mehmood's house at Sarai Kale Khan and share the booty among themselves. They, when interrogated, disclosed that they would transfer the stolen money to their kins in Bangladesh," Chinmoy Biswal DCP south-east district spoke.

There figured a name Chand Miyan who sent the money to Bangladesh through hawala.

The case has been registered and further probe is underway

Details of the accused:-

‘LIFE ESTATE’ OR ‘LIFE INTEREST’ CREATED UNDER A WILL