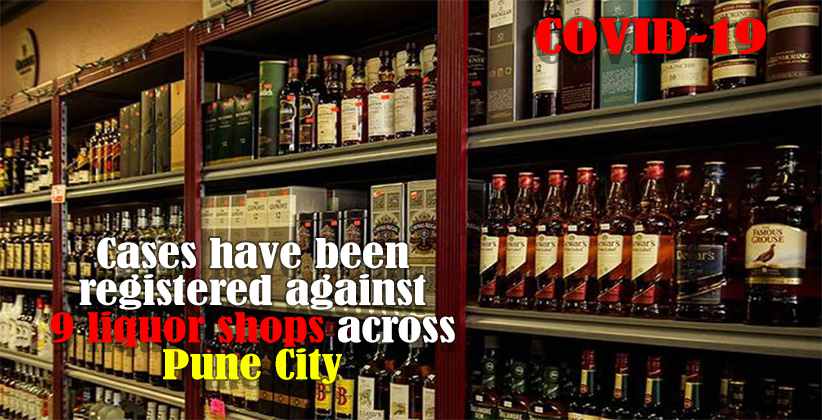 Cases have been registered against 9 liquor shops across Pune City for not following COVID-19 guidelines including not maintaining proper social distancing, sanitization, and others.

Chief Minister Uddhav Thackrey-led Maharashtra government on Sunday, 3rd May 2020 allowed for the opening of liquor shops in the state in adherence to certain guidelines. Since the said guidelines were breached, the respective shops were asked to close as per the directions of the government.

With people locked up in their homes for a month, it was hard for the State Government to assume a Utopian situation where people would not be utterly excited and would follow social distancing norms while standing in queues for hours outside wine and liquor shops.

Reportedly, wine and liquor shops were permitted to open their shops only after 2 pm on Monday, 4th May 2020 in red, orange, and green zones and not in any of the containment zones. However, queues were formed in front of wine and liquor shops as early as 9 am on Monday with hundreds of people standing in anticipation, while completely ignoring social distancing norms. People were seen standing in long queues stretching up to 1-2 km from the shop and in close contact with each other, while also forming groups in certain instances.

To beat the anticipated chaos, certain shop owners had taken precautionary steps beforehand. They marked circles for people to stand in and even put temporary barricades to restrict people from crowding in at once.

However, despite the precautionary measures, several shop owners struggled to control the crowds, even after the deployment of additional police personnel for patrol.

As much as 9 shops were booked by the Pune Police for following the guidelines given by the Maharashtra Government. It was also declared by the city police on Wednesday, 6th May 2020 that if proper physical distancing rules are not followed outside liquor stores, strict actions will be taken. Further, they also called for the implementation of a ‘token system’ for customers to purchase liquor from such stores, as already being adapted by several grocery shops around the town.