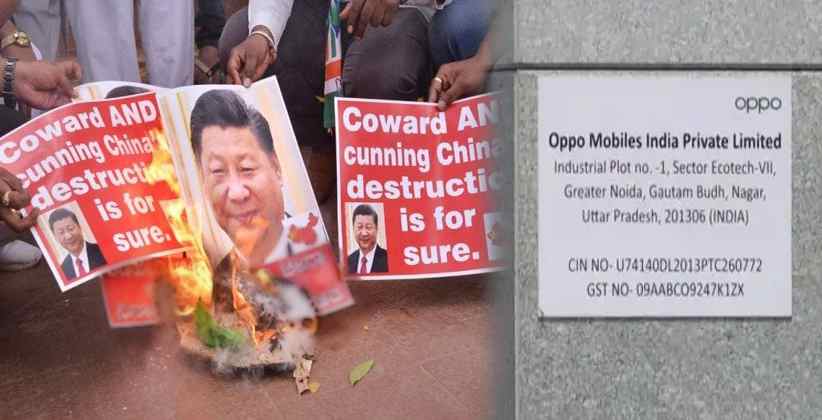 On Saturday, 20th June 2020, the protesters marched outside the Chinese mobile manufacturer Oppo factory in Uttar Pradesh's Greater Noida. Aside from the burning of the Chinese flag, these demonstrators have set fire to the effigy of Chinese Premier Xi Jinping over the recent face-off between Indian and Chinese troops in the Galwan Valley, which resulted in the death of twenty Indian Army soldiers in the line of duty.

The protest was led by members of the Bharatiya Kisan Union (Bhanu) and the right-wing Hindu Raksha Dal. At the march, demonstrators asked for a boycott of Chinese goods. Later, on Saturday, 20th June 2020 the Greater Noida Police registered a FIR against the protesters for violating the lockdown protocols and organizing demonstrations outside the Oppo office without prior permission from the authorities concerned.

Some thirty unidentified protestors, along with Hindu Raksha Dal President Bhupendra Tomar and District- unit convener Praveen Kumar, were booked under sections 279 and 270 of the Indian Penal Code, 1860 (IPC) apart from the Epidemic Diseases Act, 1897. A case has been filed in this regard at the Ecotech-1 Police Station in Greater Noida, Gautam Buddha Nagar.

However, the Chinese company, Oppo mobiles, is yet to make an official statement in this regard. The factory in question had resumed operations in May this year but had to stop again after six workers tested positive for the novel coronavirus.

Section 279 of the Indian Penal Code, 1860, states that – ‘Whoever drives any vehicle, or rides, on any public way in a manner so rash or negligent as to endanger human life, or to be likely to cause hurt or injury to any other person, shall be punished with im­prisonment of either description for a term which may extend to six months, or with fine which may extend to one thousand rupees, or with both.’

Section 270 of the Indian Penal Code, 1860, states that­ – ‘Whoever malignantly does any act which is, and which he knows or has reason to believe to be, likely to spread the infection of any disease dangerous to life, shall be punished with imprisonment of either description for a term which may extend to two years, or with fine, or with both.’

The Epidemic Diseases Act, 1897 is a law first implemented to address bubonic plague in Mumbai (formerly Bombay) in former British India. The law is intended to contain epidemics by granting special powers that are essential for the implementation of containment measures to regulate the transmission of the disease. The Act was widely used to control numerous diseases in India, such as swine flu, cholera, malaria, and dengue. The Act was enforced in 2018 as cholera started to spread in a region of Gujarat. It was used in 2015 to deal with dengue and malaria in Chandigarh, and in 2009 it was invoked in Pune to combat swine flu. Starting in March 2020, the act is being implemented across India in order to limit the spread of coronavirus disease during the COVID-19 pandemic in India.