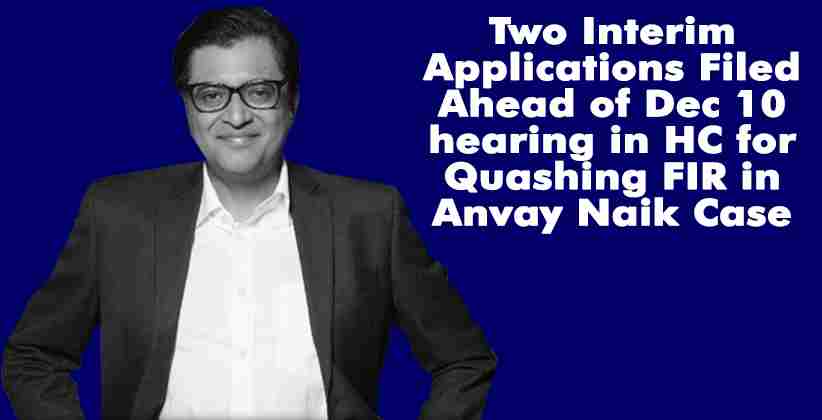 Two interim applications have been filed by Republic TV Editor-in-Chief Arnab Goswami, ahead of December 10, 2020 hearing in Bombay HC for quashing of FIR in the Anvay Naik case, about premeditated, prejudged & predetermined nature of the action by the Government of Maharashtra, specifically on the part of the Home Minister Anil Deshmukh.

Petitioner Arnab Goswami via his legal counsel has spoken of the entire exercise in malice by the Maharashtra Government from May 2020 to November 2020. The interim applications say that not only the directive for reinvestigation of a case which was closed by a court of law but also the eventual direction of the investigation, has been scripted by Maharashtra Government. While the first application is to amend the writ petition by stating that new facts have emerged since the original filing, the second interim application is regarding the statements made by Deshmukh regarding a chargesheet in defiance of all due process & in contravention of the top court observations on the matter.

In the first application, Phoenix Legal which represents Arnab Goswami, has said that on May 26, 2020, the Home Department was intervening & sending letters to reinvestigate the suicide case that was closed by a court of law following a closure report by the police. The 2nd interim application speaks of a «fresh cause of action» given that the Maharashtra Home Minister on November 28 made a public statement about a strong chargesheet in the abetment to suicide case despite scathing observations by the Top Court. The fresh application by Arnab Goswami has cited a letter to prove that the investigation is politically scripted & prejudged to target an independent journalist. This letter of May 26 by Maharashtra Home Department lays down that it is calling for a reinvestigation into the previously closed Anvay Naik suicide case, & transferring it to the CID.

The interim application says that there is a well-documented pattern of interference in the present case on the part of the Home Department, Maharashtra State & the Home Minister Anil Deshmukh. It says Deshmukh has in the past spoken of an elaborate inquiry on the floor of the Maharashtra Assembly. The Supreme Court had made multiple observations in the judgment that granted bail to Arnab Goswami and others.

Supreme Court: ‘Not Wearing Masks Amid the Pandemic violates the Right to Life of others’