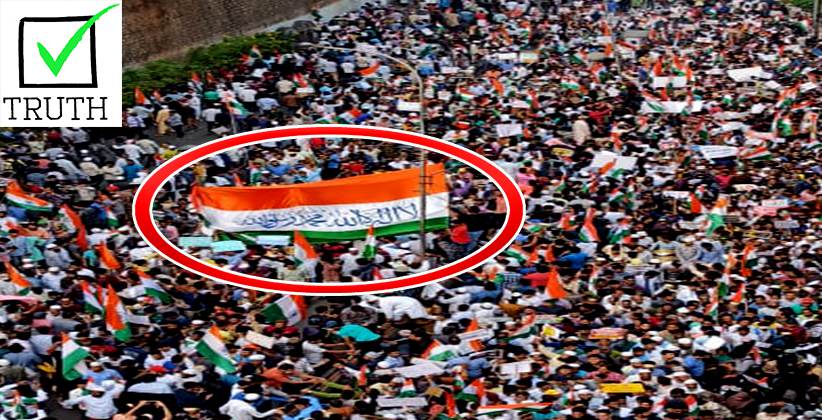 During one of the anti CAA protests in Hyderabad, a shocking visual came to light. The Ashok Chakra of the Indian National Flag was replaced with an Islamic Shahada ‘La Ilaha Illallah’ which means “there is no other God but allah”.

On the official twitter handle of The News Indian Express, Telangana (TNIE, Telangana), the following tweet was seen on Jan 04, 2020, the image of which was credited to photojournalist Vinay Madapu.

LawStreet Journal approached TNIE to verify the veracity of the image and the claim, which was confirmed as true and correct.

The slogan ‘La Ilaha Illallah’ which means “there is no other God but allah” is now being openly used to mock the Constitution and the revered Ashok Chakra of India’s national flag in the name of secularism by replacing it with the same Islamic Shahada that once provoked the gullible Kashmiris in January, 1990 in order to provoke them to wash their hands in blood of their own brothers in the name of Allah leading to a macabre tale of the Kashmiri pandits massacre.

The Flag Code of India, 2002 contains executive instructions issued by the Government of India. Also, in terms of Section 2 of Insults to National Honour Act, 1971 – no person shall burn, mutilate, deface, defile, disfigure, destroy, trample upon or otherwise show disrespect to or bring into contempt (by words, either spoken or written, or by acts) the Indian National Flag.

Strict action must be taken to curb such instances that rip apart the country in the name of religion.