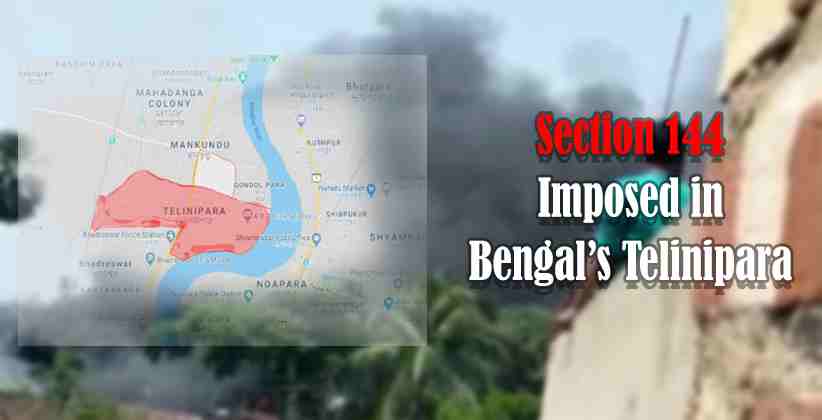 Amid lockdown, riots and mob violence due to the coronavirus were recently reported out at Telinipara in Hooghly district of West Bengal. At least 50 people have been arrested in the matter and Section 144 of the Criminal Procedure Code (CrPC) has been imposed in the area since Tuesday, 12 May 2020

As per reports, fights in the Bengal locality ensued on Sunday (10 May 2020) after two groups clashed over COVID-19 containment in the area. When the outbreak took an ugly turn, massive police forces were deployed in the area and as per the latest reports, the Rapid Action Force (RAF) has also been positioned for conducting peace marches in the region.

So far, close to four police personnel and seven local people have been injured in the violence and several shops and public properties have been damaged, after locals hurled bombs and attempted to set fire in the locality.

As per unidentified sources, the trouble erupted after a group of people from a COVID-19 containment area visited another locality in the region to use public toilets. One group called the other ‘corona’, which started the battle between the two.

Since the local authorities failed to implement the containment measures (as demanded), residents of the Hindu-dominant locality themselves put up barricades around their area, preventing entry of outsiders into it. Enraged, locals from the Muslim-dominated regions started riots by hurling bombs and damaging houses, shops, and even temples in the region. Many sustained injuries due to the violence and vehicles were also damaged.

Bansal further blamed the Police Authorities of Telinipara for displaying an insensitive attitude towards the incident and failing to take prompt action on the matter. He even claimed that similar cases of violence are taking place in other areas of the state such as Howrah and Murshidabad, but no action is being taken by the state authorities to curb them.

As per reports, Hooghly District Magistrate, Y Ratnakara Rao has confirmed that internet services will remain suspended till 17 May 2020 in Telinipara to prevent the circulation of fake news and videos.