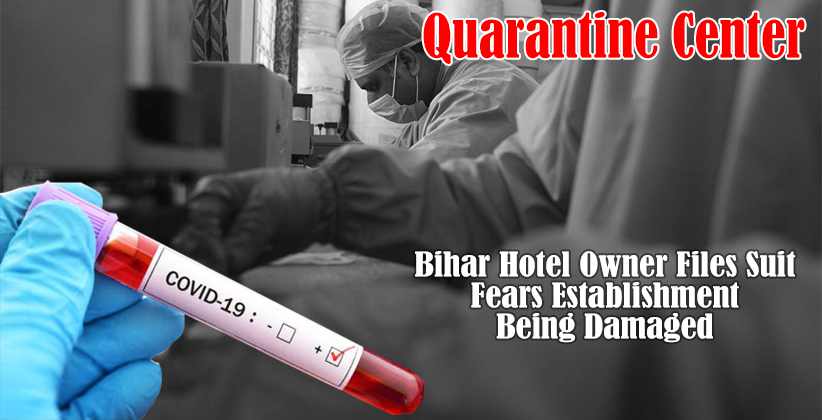 The owner of a Hotel in Bihar petitioned a case at the Patna High Court expressing concern about his establishment, which was taken over by the state and converted into a quarantine center. The Hotel, known as the ‘White House’ is situated in Bihar’s Munger district; the only local region with Corona cases numbering in the Hundreds. The owner, Mr. Bharat Yadav, filed a petition in the court to express his concerns over the mismanagement of his establishment’s furniture and other accessories, which may cause him losses to his business in the future.

Mr. Yadav’s counsel urged before the single judge bench that the petitioner has no complaints with the state temporarily taking over his property, and understands the need for quarantine centers to fight the virus. Nevertheless, his concerns are about the accessories installed within the establishment and worries about his furniture and other equipment getting damaged while the state controls the “White House”. The petition does not challenge the state’s decision to convert the Hotel into a center; however, the suit does pivot on the possibility of the state’s officers mishandling much of what rests within the premises.

The counsel for the petitioner prayed before the court to mandate the respondents’ duty to prepare an inventory of all articles that currently exist within the hotel’s premises. The demand essentially is to create and maintain a record of all items in the “White House’ which can be used to tally the accessories once the quarantine center is reconverted. Mr. Yadav’s authorized representative says that the state has entered and taken over the Hotel; accordingly, it must in the form of an inventory provide assurance for the items that exist within the establishment. He further added that a copy of the said document must be made available with the petitioner and all items within the hotel must be returned in proper condition.

The state’s representative, Mr. Sarvesh Kumar Singh (Additional Advocate General) admitted that the petitioner's claims deserved proper redressals, however, the district magistrate’s instructions over the said matter must be taken, as it was under his authority that the hotel was sanctioned.

The court accepted the claims and issued the order for the District Magistrate to prepare an inventory of all of the Hotel’s accessories; in the presence of the owner or his manager. In order to maintain confidence, videography of the premises and all items within it may also be conducted on desire of the petitioner.

Posting the matter for further hearing on June 2, the court directed the AAG to file counter affidavit within three weeks, hand over a copy of the same to the petitioner who could file a rejoinder if he so desired within a week.