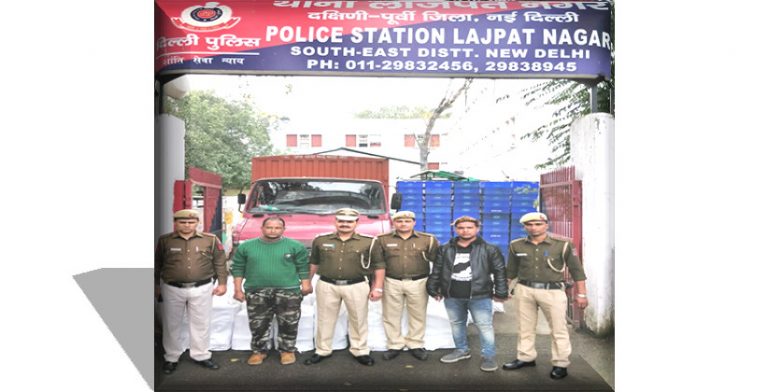 Delhi, south-east district police caught 2 interstate liquor smugglers and seized a huge haul of liquor being peddled in the city. The police following some specific leads had been tracking such bootlegging across the city. Cracking down on liquor suppliers, receivers and distributors, the district police are giving no room to contain the smuggling of liquor.

A team of PS Lajpat Nagar led by SHO inspector Pankaj Malik under the supervision of Brijender Singh ACP sub-division Lajpat Nagar acting on a tip-off nabbed 2 liquor suppliers Virender Singh alias Bindu 46 years and Aman 26 years who were found smuggling liquor in a TATA 407 Tempo, recovered from them were 220 cartons of liquor concealed behind the empty milk crates of ‘Mother Dairy’.

They were caught in a dramatic manner, the lead was further developed and a trap was laid opposite Nehru Nagar on the Ring Road. The police team erected barricades and started checking vehicles. At about 12:40 am, a TATA 407 Tempo bearing Haryana registration number was seen coming from the Ashram side and was going towards Dhaula Kuan. The police team intercepted the tempo at the picket. The driver of the tempo was identified as Virender Singh and his helper Aman were caught when the cops confirmed the bootlegging.

"The team searched the tempo and found 60 empty milk crates of Mother Dairy in the vehicle. Behind the towers of crates hiding the liquor cartons were found. 220 cartons (peti) of liquor contained 4000 quarters (pauva) (180 ml), 2880 halves (addha) (375 ml) and 240 bottles (khamba in the local parlance) (750 ml) of Asli Masaledaar Deshi Sharaab, 'for sale in Haryana only' were found. Accordingly, a case vide FIR no. 109/19, under Section 33 and 58 of Delhi Excise Act, 2009, was registered. Both the accused were arrested and recovered liquor and TATA 407 was seized," Deputy Commissioner of Police, south-east district Chinmoy Biswal spoke.

When interrogation furthered, the accused driver Virender Singh disclosed that he used to work as a cab driver but he wanted to make a fast buck. He planned to sell illicit liquor and roped in one Aman, who lived in his locality in Dakshinpuri. Aman agreed readily as he had been out of work for some time and wanted something to do.

"It disclosed further that the said second-hand tempo used in bootlegging was purchased for ₹1,65,000 a couple of months ago. Virender procured old milk crates from junk-dealers. They used to buy liquor from liquor godowns of Faridabad and sell at higher prices in the area of Dakshinpuri and Ambedkar Nagar. While transporting, they concealed the liquor behind the façade of the milk crates to actually make it seem like one supplying milk. They would supply in the night amidst the crowd of other vehicles that ply at night. The proactive team searched every bit of the laden tempo and unveiled it. The case has been registered and probe is on," Biswal added on.

False Nomination Form By Election Candidate Would Not Amount To Corrupt Practice If It Was Rectified Before Scrutiny: SC