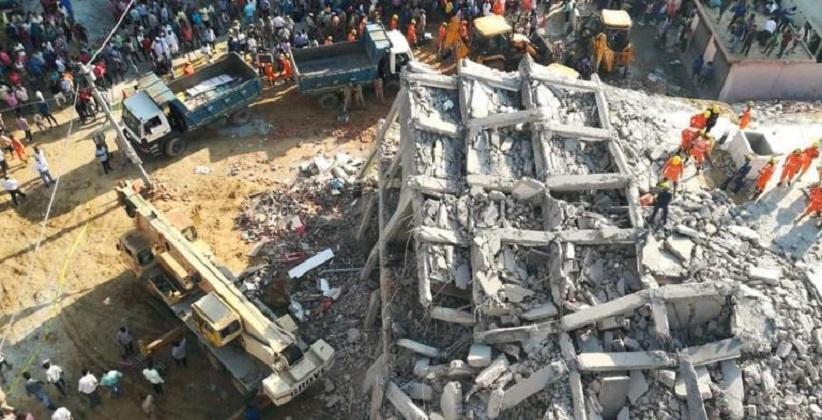 On Tuesday (July 17th, 2018) night two buildings in Greater Noida’s Shahberi village had collapsed, resulting in a death of nine people, including a one-year-old girl.

Officials said that around 50 people are feared trapped inside the collapsed building.

Four National Disaster Response Force teams, around 160 men, are searching the rubble for signs of life. An NDRF official said that the way one building was titled onto the other is complicating the operations. Rescue dogs, two hydraulic cranes and six bulldozers are part of the operation.

A case has been registered against 24 People with 4 persons including the landowner have been arrested, namely Gauri Shankar Dwivedi, Quasam, Dinesh, and Sanjeev.

The FIR has been registered under Section 304 (culpable homicide not amounting to murder), Section 388 (extortion by threat of accusation of an offence punishable with death or imprisonment for life), Section 288 (negligent conduct with respect to pulling down or repairing buildings), and Section 427 (mischief causing damage to the amount of fifty rupees) of the Indian Penal Code, 1860.

As per the reports, the said building was unauthorized and it collapsed due to too much moisture in the walls of the basement and use of poor construction material.