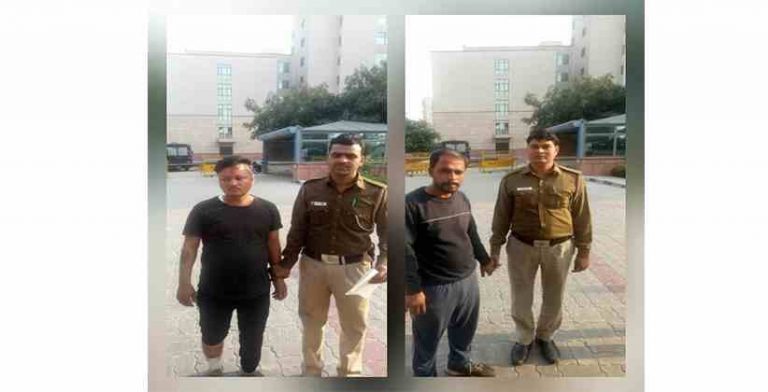 Crime, Police And Law Mar 09, 2019 Syed Wajid 0 Shares
0 Shares
The staff of Sarai Kale Khan in two hours arrested a driver who with his accomplice robbed passengers of cash. They would make innocent labour class commuters from other states their soft target.

The driver-conductor duo identified as Jitender Singh Porwal 34 years and Amit 24 years had been robbing passengers on board. The bus has been impounded by the police and the amount of cash robbed has been recovered. It was when a group of robbed passengers (from Bihar) about 7 in number reported to the QRT Vehicle at Sarai Kale Khan Bus Stand in connection with their cash looted by the driver and conductor of a private bus bearing number UP 14 GT 8253. The victims all from Bihar came to Delhi for the first time for labour jobs. In the morning, they all reached Anand Vihar Railway Station by train and after that they boarded the above mentioned private bus to go to Najafgarh. Meanwhile, when the bus reached over Yamuna Bridge, the conductor of the bus closed the rear door of the bus and threatened all the passengers by using a danda and looted their money. After looting the money, all 7 passengers were forced to get off the bus near Sarai Kale Khan flyover. On the statement of victims, a case of robbery vide case FIR No. 65/19, under Sections 392 and 34 of Indian Penal Code, 1860, PS Sunlight Colony was registered and investigation of the case was initiated.A team comprising SI Naveen Kumar, ASI Narender and ASI Yogesh with others led by SHO inspector Hanumant Singh under the close supervision of Birjender Singh ACP sub-division Lajpat Nagar was constituted. The team swung into action soon after the matter was brought to notice, the team reached Anand Vihar Bus Terminal, many drivers were questioned in the process. The said bus was also traced and the driver and the conductor were identified and arrested before they could possibly escape. The cash ₹ 4000 robbed was recovered from them. "After sustained interrogation, they confessed to the crime and disclosed further that the bus belongs to one H.K. Chaudhary Transport. They are alcoholic and committed crimes to satisfy their whims and addiction. The modus operandi employed by them was to target those who are labour class and new to the city. They would collect passengers for their designated place and rob them on an isolated stretch and get them off after robbing them. The case has been registered and the probe is initiated," Police Chief of the district south-east declared.

Judiciary Jan 20, 2020 Lawstreet News Network 8 Shares
8 Shares
Citizens ought to understand their obligations, said the Bombay HC on Friday (January 17, 2020) while dismissing a Public Interest Litigation (PIL) with respect to illegal parking and abandoning of old vehicles on Mumbai’s streets. A bench of Justices Satyaranjan Dharmadhikari and Riyaz Chagla opined in their order that, “If they are going to obey the law only when action is taken against them or they are penalised, then we don't think that they can be assisted & helped. They...
Read full post