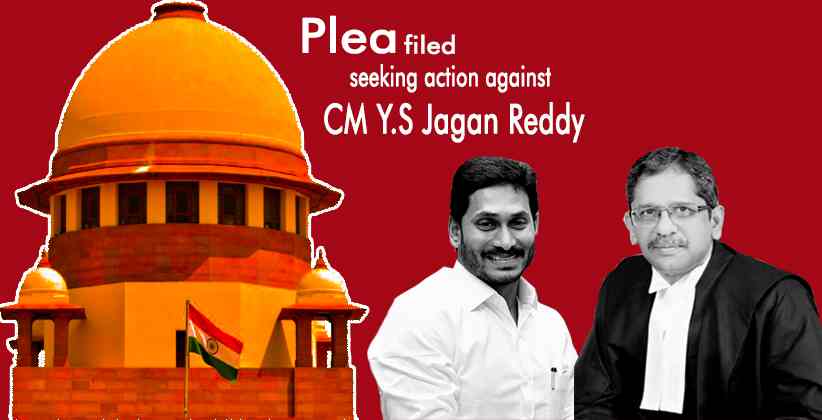 Crime, Police And Law Oct 15, 2020 Neha Bharti ( Editor: Ekta Joshi ) 8 Shares
8 Shares
Two practicing Advocates have filed a plea in the Supreme Court seeking action against Chief Minister of Andhra Pradesh YS Jagan Reddy, as he falsely accused the second most senior Judge of the court Justice NV Ramana, of interfering with the administration of Justice.

The petitioner Advocates GS Mani and Pradeep Kumar Yadav demanded that time-bound judicial inquiry should be made against the allegation made against the sitting judge by Chief Minister of Andhra Pradesh and appropriate action should be taken against Chief Minister of Andhra Pradesh.  The petitioners in theri plea also sought the issuance of a writ under Article 32 Constitution of India,1950 in the nature of 'Quo Warranto' against YS Jagan Reddy declaring in that he has no authority to hold the post of Chief Minister of a State of Andhra Pradesh as he is “misusing his position and power as a chief minister by making of false, vague, political and scandalize remark and allegations openly in the public and media against the senior-most sitting judge of this Hon'ble court and render justice". Quo warranto is used to test a person's legal right to hold an office. It is a form of legal action used to resolve a dispute over whether a specific person has the legal right to hold the public office that he or she occupies.

The petitioners also highlighted the point that the executive should not overtake the judiciary. However, in the present case, YV Jagan Reddy has disturbed the judicial independence by making a false allegation against a sitting judge. The plea also stated that “No one including these PIL writ petitions has never or ever entertained corruption in the government as well as in the judiciary. But at the same time independence and integrity of the judiciary is most important. A person who is holding the post of head of the State Executive should not overtake the judiciary by making a false allegation against the sitting judges of the Hon'ble Supreme Court. The general public confidence over the judiciary is the paramount importance of public lost their confidence and faith of addition there is no purpose".

It is also submitted in the plea that if YV Jagan Reddy has any grievances or he has aggrieved by any decisions which are pending in the court he has a full right to challenge the same before the highest form of the court in accordance with the law. However, "without taking any legal steps as per the law", he wrote a letter to Chief Justice Of India making a vague allegation against the sitting judge of the Apex Court and he even published the same letter in the public domain only to distort the image of the Apex Court.  It is also alleged that YS Jagan Mohan Reddy has attempted to shake the public confidence in the judiciary for his personal gain as he himself is facing a number of criminal cases with the Central Bureau of Investigation and the Court.  On October 11, 2020, YS Jagan Mohan Reddy wrote a complaint to Chief Justice of India S A Bodbe alleging that some High Court judges are attempting to protect the interest of major opposition party Telugu Desom Party in politically sensitive matters. The complaint details were revealed to the media in pressure by Ajay Kelam advisor of the Chief Minister of Andhra Pradesh on October 10, 2020, in the evening, that it has accused senior Supreme Court judge Justice NV Ramana who is next in the line to be Chief Justice of India, of influencing the administration of justice in the High Court.  A plea was also moved before the Supreme Court stating that the contents of the release letter have shaken the confidence of the people in the judiciary.  Judiciary stands between the citizen and the State as a rampart against misuse or abuse of power by the executive. Therefore, it is absolutely essential for the judiciary to be free from executive pressure or influence. The Constitution of India does not follow the doctrine of Separation of Power but it has been retrieved in many cases that the independence of the judiciary is a basic part of the constitution.

Judiciary Oct 23, 2020 Atharwa Gauraha ( Editor: Ekta Joshi ) 1 Shares
1 Share
In a recent case, the form of the insurance proposal included questions relating to the health and medical history of the proposer and required detailed disclosure as to whether the proposer had experienced any disease, hospitalization, or treatment, as well as a declaration of good health. The proposer replied to the questions in the negative, which indicated that he had not received any medical care or hospitalization and that he had no sickness or disease.Acting on the basis of the request...
Read full post