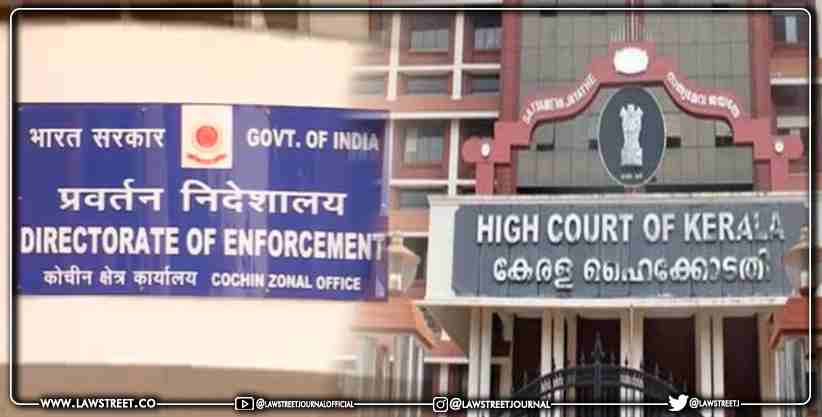 The Cochin Zone Enforcement Directorate has moved the Kerala High Court against appointment of Judicial Commission by the State Government to inquire to various conduct of various Central Agencies in Kerala from July 2021.

Chaired by Former Kerala High Court Judge VK Mohanan, the Kerala Government had constituted the Judicial Commission to examine the alleged attempt on the part of the Customs Department and Enforcement Directorate (ED) to falsely implicate Chief Minister Pinarayi Vijayan in the UAE gold smuggling case.

As per the petition, the notification is an attempt of those in power to stop the Central Agency in investigating the gold smuggling case.

The plea points out that since the Principal Secretary to the Chief Minister and the State Home Minister were found involved in the case, the impugned notification has been issued to "interfere, impede and imperil the ongoing investigation being legitimately conducted by the Enforcement Department.” The notification was issued on May 7, 2021.

The petition further states that the notification is ultra vires of the powers under Section 3 r/w 2A of Commission of Inquiry Act in as much as the State Government is not the appropriate authority in matters related to an entry in Central List/ List-I of the 7th Schedule of the Constitution.

It is further submitted that the Prevention of Money Laundering Act 2002 is exclusively traceable to Entries 1, 10, 14, 93 of List I and does not fall under either List II or List III. The plea states, “the Notification seeks to challenge the constitutional doctrine of Federalism apart from attempting to interdict the legitimate investigation being conducted by Enforcement Directorate in respect of the matter coming under PMLA Act.”

Previously, two FIRs were registered by the Kerala Police Crime Branch against ‘unnamed officials’ of the ED for allegedly coercing the accused in the gold smuggling case to give false incriminating statements implicate Chief Minister Pinarayi Vijayan and other state functionaries. Quashing this, the High Court of Kerala held that the bar under Section 195(1)(b) of the CrPC was attracted in the case against the FIRs. As per Section 195(1)(b) CrPC, the cognizance of an offence relating to fabrication of evidence in a matter pending before court can be taken only on the basis of a complaint filed by that Court.