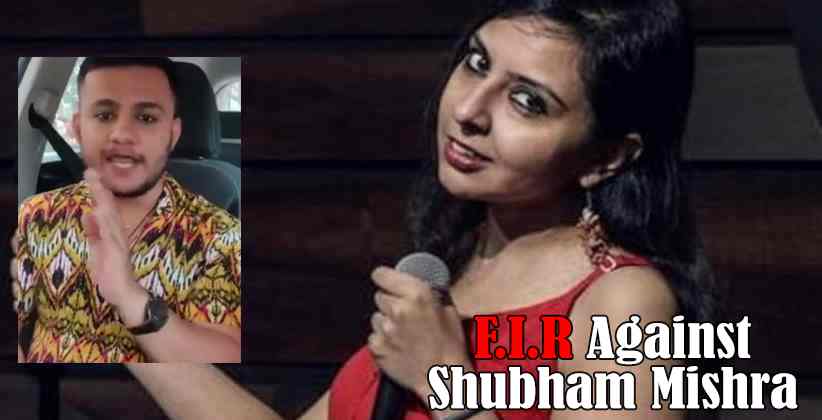 Vadodara Police has registered a suo moto FIR against Shubham Mishra who allegedly spewed rape threats against comedian Agrima Joshua on social media. The police have detained him for the offense.

According to The Indian Express, the cybercrime cell of Vadodara police has booked Mishra under Section 294(Obscenity), 354(A), 504(intentionally insults to break public peace), 505(statements conducing to public mischief), 506(Criminal intimidation), 509 (intending to insult the modesty of women) of IPC, 1860. The police also booked Mishra against IT Act 67 (transmission of electronic material which is lascivious or tends to deprave or corrupt people).

According to Ahmedabad Mirror, Mishra on Saturday had uploaded a video on Instagram in which he used abusive language and made a public threat of rape against comedian Joshua over some which she made on Chhatrapati Shivaji Maharaj.

The Mumbai based comedian Joshua on Saturday (July 11, 2020) was forced to apologize for a joke that was made a year ago in which she proposed about the Chhatrapati Shivaji Maharaj statue being planned off the coast of Mumbai.

According to reports, a clip from Joshua’s show in Mumbai last year in which she spoke about the statue built in Mumbai had gone viral in social media since then Joshua has been receiving threats online. Joshua on Friday took down the clip and also apologized Anil Deshmukh who directed police to take action against her.

Anil Deshmukh has tweeted “I have instructed CP (Commissioner of Police) Mumbai and IG (Inspector General) cyber to take legal action expeditiously.” He further said, “I urge everyone to maintain calm and the law will take its course.”

In a video posted on twitter, Joshua apologized to anyone she may have offended.

The National Commission for Women (NCW) has taken cognizance of the threats Joshua has received and sought immediate action from Gujarat Police against such abuse and threats to the comedian.

NCW Chairman Rekha Sharma said in the letter sent on Saturday ( July 11, 2020) night, “The NCW is committed to creating safe online space for women and ensuring cybersecurity to women and is perturbed by the rise in use of cyberspace to instigate crime against women.”