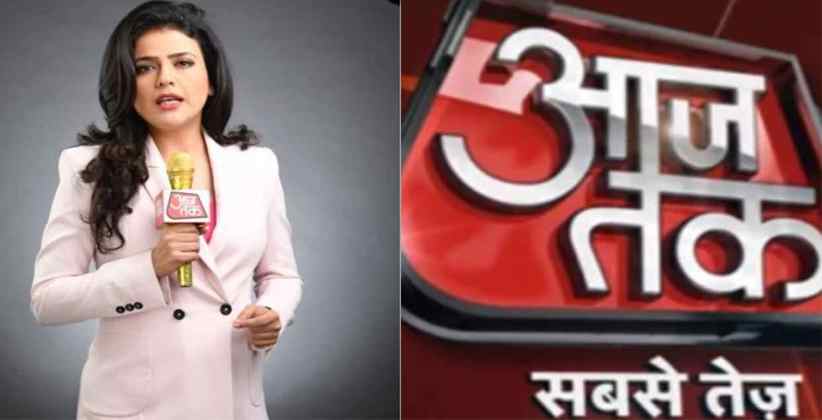 Film Producer Nilesh Navlakha launched a complaint in the Ministry of Information and Broadcasting, seeking suspension of the news channel ‘Aaj Tak’. The complaint was regarding inappropriate comments made by its news anchor Sweta Singh while covering a report on the border dispute between India and China.

The complaint alleged that the comments were ‘distasteful, disparaging and insensitive’ and it insulted every hero of the Indian Armed Forces. It also states that the channel carried out insensitive coverage of the death of film actor Sushant Singh Rajput.

During a discussion that took place on the channel, anchor Ms. Shweta Singh and her colleague Mr. Rohit Sardana blamed the Indian Army while defending the government for the casualties that took place on Tuesday in Galwan Valley. Commenting on the face-off, Sweta said, “The duty to patrol the borders is of the Army and not the government. The Indian Army has the freedom to patrol without waiting for a command from political masters. If the reports say that china overtook Indian land, it raises a question on the Indian Army.”

“This isn’t a situation where you ask questions after something has occurred. There are a few questions to be answered here. Firstly, if the People’s Liberation Army entered Indian territory and our soldiers were sleeping, then it’s on the Army and not on the government because the government is not on patrolling duty, the Army is,” she added.

The complaint, made through advocates Rajesh G Inamdar and Amit Pai, states that the news channel’s broadcast “clearly attacks the sovereignty and integrity of India, the security of the state, public order, decency or morality [Article 19(2)] and in no manner fits in the realm of freedom of press”. Such remarks can affect the morale of the Armed forces and the formulation of strategic protocols, it added, mentioning that the television anchors were not experts in the field for commenting on such sensitive issues.

“In a tense situation, with the broadcast reaching crores of people, this is a deliberate attempt to spread a negative emption against the Indian Armed forces, and in direct breach of the Programme Code,” the complaint added. It also said, “The channel and its anchors have insulted every hero of the Indian Armed Forces presently serving the nation, Martyrs, their family members, and every Citizen of this nation by their insensitive, disparaging, gross, distasteful, disrespectful, unlawful, speculative and irresponsible remarks against the Indian Armed Forces.”

The complaint refers to Section 5 of the Cable Television Networks Act, 1995, Rule 6(a), (c), (d), (e), (h), (i), of the Cable Television Networks Rules, 1994, the Code Of Ethics And Broadcasting Standards and News Broadcasting Standards Regulations. These provisions provide the government with the power to suspend/cancel the license of any news-channel.

Another legal notice was sent by Adv. Farrukh Khan, a practicing lawyer from Delhi, to Ms. Sweta Singh, Aaj Tak and India Today Group. It stated that “deliberately demeaning and slandering the valor and bravery of Armed Forces of India by knowingly and willingly spreading false, wrong and unsubstantiated information through your (Aaj Tak’s) channel” is dangerous to the national security of India.

The complaint made by Mr. Navlakha also cited the insensitive coverage of Sushant Singh Rajput’s death in which inconsiderate questions were asked from his family members and fake tweets and screenshots were attributed as the actor’s last tweet on Aaj Tak news channel.