[COVID 19]: 76 Cases Registered In Pune Against Offenders Under Section 188 of IPC 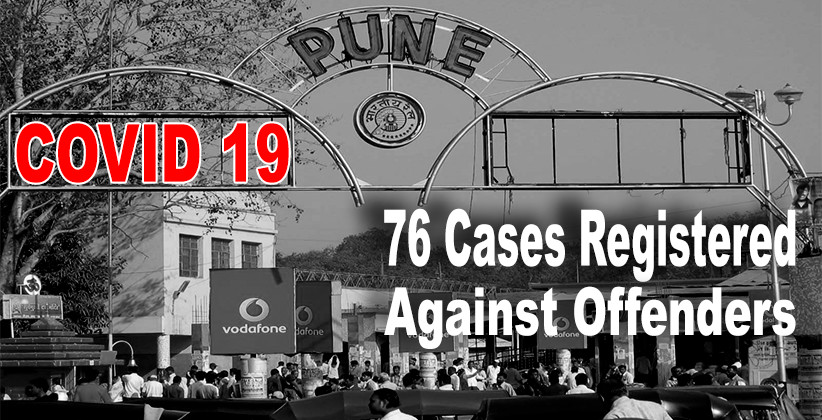 There have been 76 cases registered by Pune Municipal Corporation (PMC) under Section 188 of Indian Penal Code 1860 (IPC) and there were about 350 offenders in violation of the order made by the Government which was restricting the assembly of more than five people in private establishments under Section 188 (disobedience to order duly promulgated by public servant) in Pimpri-Chinchwad.

The Deputy Commissioner of Police (Special Branch), Mitesh Gatte said that “The residents of the city and private establishments should follow the rules strictly and avoid stepping outside their houses. We have formed 122 teams and we will continue taking action”. The District Collector Naval Kishore Ram said strict measures will be taken against violators and appealed to the public to follow the law and remain safe through social distancing. To make more crackdowns against the violators and public gathering in coming days, there will be a patrolling of more than 1000 policemen on the city roads of PMC and (Pimpri Chinchwad Municipal Corporation (PCMC).

The IT-Companies in Pune are shutting offices due to the outbreak of Coronavirus (COVID-19) and providing methods to work from home as their work will continue the essential services like banking, pharmaceutical industry, and logistics.

According to the statement which has been released by the Chairman of National Association of Software and Service Companies (NASSCOM), “We know that if the entire industry (across countries) shuts down overnight, what the globe determines as ‘essential services’ will come to a standstill. You know that the industry serves banks, utilities, retailers, airlines, shipping companies / freights and containers, healthcare and Pharma organisations, insurance companies and so on. Being such a backbone for the entire globe, it is rather impossible to come to a grinding halt”.

The Brazilian Olympic Committee (COB) called for the suspension of Olympics in Tokyo and proposed they be held on the same dates in 2021. The statement was posted on the Website of COB, “As an ex-judoka and coach in the sport, I learned that every athlete’s dream is to go to the Olympics in top form, it’s clear that right now maintaining the games for this year will impede this dream from being fully realised. The IOC has gone through immense problems before, with the episodes that ended in the cancellation of the games in 1916, 1940 and 1994, because of the world wars, and the boycotts of Moscow 1980 and Los Angeles 1984.”

Know What Establishments/Services Are Exempted From Lockdown In Delhi; [Read Order]