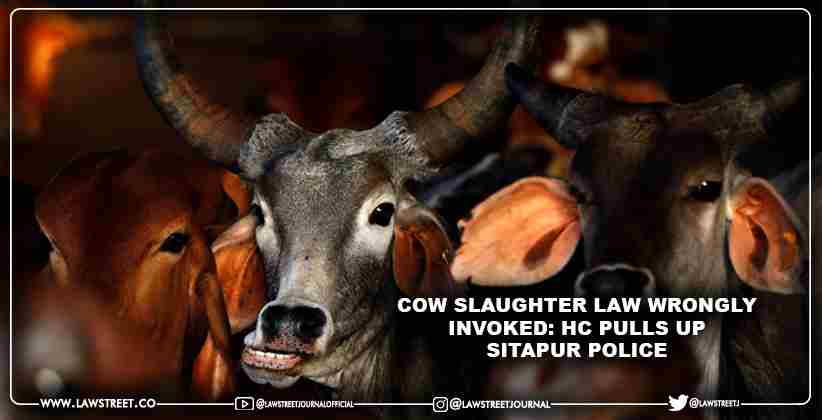 The High Court of Allahabad has pulled up the Sitapur Police & sought a reply from the district SP within two weeks over a case registered under the UP Prevention of Cow Slaughter Act in February after it observed that provisions of the Act “have wrongly been invoked against the applicant”.

A Bench of Justice Abdul Moin was hearing the bail plea of one Suraj (22), who was booked under Section 3 & 8 of the Act on Feb 25, along with three others — Ibrahim, Aneesh & Shahzad.

The FIR was lodged based on a complaint from police alleging that a police team had overheard a conversation between the accused about having slaughtered 3 calves. The FIR states that on the basis of a tip-off from an informer, the police team had “carefully crept up to the aforesaid persons & had heard them talking with each other in the bushes that they had slaughtered three calves & have received huge amount of money & that now they were having two bulls in their possession & planned to slaughter them too”.

According to the Court order, the FIR, lodged by Senior Sub Inspector Deepak Kumar Pandey, states that four persons, including the applicant, were arrested & “two bulls, one bundle of rope, one hammer, one ghadasa (small), one ghadasa (big), one nail & 12 empty packets of 5 kg each were recovered” from the possession of the accused.

Arguing that the applicant has been in jail since February 25th 2021 “on the basis of such frivolous charges”, Suraj’s counsel Dileep Kumar Yadav argued that “mere recovery from the possession of the applicant the two bulls & other instruments would not make out a case” to invoke provisions of the Act.

However, the Additional Government Advocate (AGA) submitted that once the instruments & two bulls were recovered, it was apprehended that the accused were in the process of slaughtering the bulls. The AGA said that on the basis of the conversation overheard by the team, a clear case of cow slaughter is made out against the applicant & hence there was “no illegality & infirmity” in the FIR & the applicant “has, thus, legally been incarcerated in prison”.

The Court said that after going through the FIR, “it clearly comes out that neither the bulls which were found in possession of the applicant had been slaughtered nor were maimed or had any physical injury”.

“It was simply on the basis of alleged conversation which was overheard by the police” that a case was invoked. It said that in the “present case, mere recovery of two bulls from the possession of the applicant & others apart from the other instruments would prima facie indicate that no case under section 3 & 8 of the Act is made out," the Court said.

The court also observed that the applicant was in jail for more than two-and-a-half months on the basis of sections invoked against him which “would prima facie not be attracted in the said incident”.

The Court granted the applicant bail upon furnishing a personal bond & two sureties each.

It said that it would have “parted with the case” after granting bail but it “finds it in the interest of justice to direct the Superintendent of Police, Sitapur to file his personal affidavit” regarding “the averments made in the bail application as well as indicating as to how the cognizance of Sections 3 & 8 of the Act, 1955 have been invoked against the applicant”.

The Court granted the Sitapur SP two weeks’ time to submit the affidavit & listed the matter for hearing on June 16th 2021.