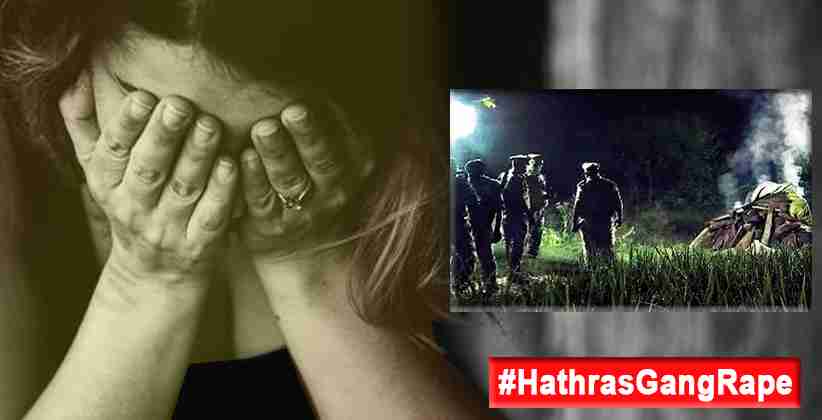 A 20-year-old Dalit woman was recently the gang-rape victim in the Hathras town of Uttar Pradesh. She was gang-raped and tortured. She recently died in a Delhi Hospital. Yesterday, i.e. September 29th, 2020, she was cremated by policemen, while her family and other relatives were locked up by the cops allegedly. A few horrifying and disturbing visuals show the family in a heated argument with the police officials. The video also displayed the female relatives throwing themselves on the ambulance that carried the dead body of the young victim. all this took place, while the mother wept. Amidst all this, the police officials insisted on cremating the young Dalit girl without allowing the family to take a last look.

The young victim had recently died in Delhi's Safdarjung Hospital. Suffering from multiple fractures, paralysis, and a gash in her tongue, her case was compared to the horrifying 2012 Nirbhaya Case. Several people came to show support to the family and even chanted “hang the rapists”. However, the women’s family cried out that the body of the victim was taken away by the UP Police without them being informed. Her father and brothers have been taken by the police in a black Scorpio after they protested.

The body of the woman was taken to her village after midnight. Affirming the suspicion of her relatives, the UP Police wanted to complete her last rites there. They did not hear the pleas of the woman’s father who constantly repeated that this was “against their tradition”. The father pleaded for them to be allowed to take their daughter home.

“We wanted the last rites to be performed according to the Hindu traditions. Despite our protests, the cremation was performed. They took the body forcefully. We couldn't see our daughter's face for the last time," the woman's father told NDTV.

The vehicle was attempted to be stopped by the female relatives. The mother of the victim allegedly sat on the road as she continued to sob and beat her chest. Even though the police vehicle was stopped at various points, the cops continued to push the protesters and continued to drive towards the funeral ground.

“Continuing their inexplicable acts, the Hathras police formed a human chain to keep reporters, the family, and villagers away. Only cops were present. Her family could not see her one last time. They were allegedly locked up at home.

Amid spiraling outrage, the Hathras police claimed the cremation was carried out with the family's consent and some members were present. It turned out to be one uncle - not her parents - who were called and shown the cremation.”