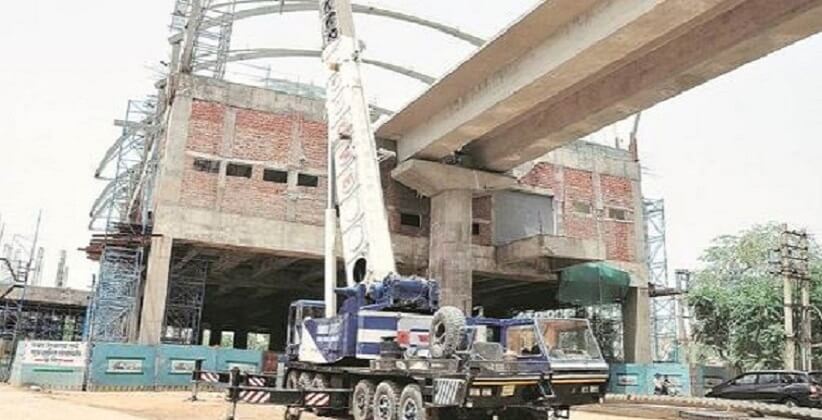 On Monday (July 16th, 2018) PCR received a call at 0520 Hrs at Pandav Nagar police station regarding the robbery at copper wires at Yamuna Khadar, opposite Akshardham Temple. Investing Officer SIR N. Pathak along with constable Pradeep reached the spot.

After the inspection it was found that Mithilesh Jha who was a security guard was found, he was working on the under-construction elevated metro track and that night four persons had come to the tracks under the cover of darkness,  had kept him hostage by tying his hands and feet.

When Mithilesh Jha tried to resist they hit him with the steel rod and after that dacoits started cutting the copper connecting wire from the bundles lying on the track and collected the pieces in a truck waiting for them.

In the meantime, some other security guards also got suspicious about the truck and attempted to intercept it at the spot. In its hurry to escape, the truck got stuck in the mud and the truck driver Ishtiyaq was apprehended while his partner later identified as Imran managed to escape as did the other dacoits.

After the interrogation with Ishtiyaq who was caught on the spot revealed that he was only the truck driver, who is living in Gazipur, he was contacted by one unknown person who asked him to collect certain goods from the spot.

Immediately team was formed under the leadership of IPS ACP/Mayur Vihar Sh. Shobhit Saxena, with the collection of clues and facts a list of suspects was made due to which several raids were conducted in next few days.

Eventually, after the raids four dacoits named Imran (Kabadi), Kamal @ Bheem (Master Mind), Nirdosh, Murari and Vikas @ Vicky. to the spot was identified and arrested with full recovery of all stolen items including recovery of the stolen weapon and mobile phones of the watchmen.