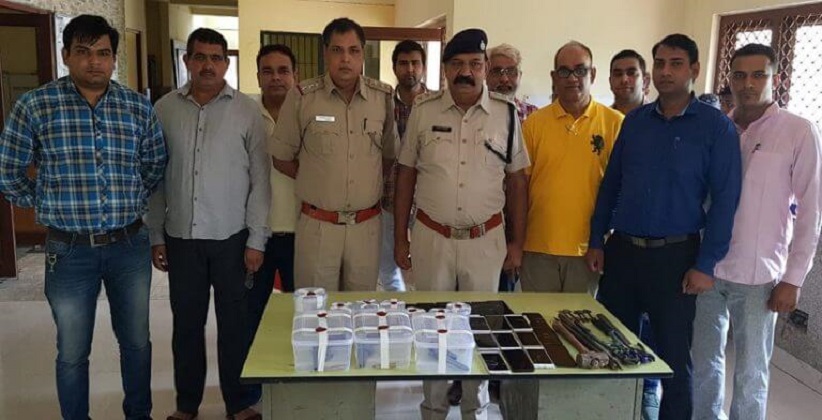 On August 17, 2018, an information was received at the office of Special Staff/Outer District that 5-6 desperate and notorious robber-cum-burglars of Nizam & Rokha gang who have committed dozens of robberies, burglaries and thefts in many posh areas of Delhi, will be coming to Pushpanjali enclave via Rani Bagh in an Auto along with illegal arms to commit another burglary.

A team under ACP Operations Dinesh Kumar was sent and a vigil eye was kept over the vehicles coming from Rani Bagh to AnuKampa Chowk. As the suspected auto was seen coming, it was restrained and asked to stop. As soon as the Auto was stopped, all the passengers including the auto driver tried to escape from the spot but the vigilant police staff caught hold of all the accused persons despite knowing the fact that accused persons might be carrying illegal arms with them.

During interrogation, it was revealed that they have committed dozens of robberies, burglaries and thefts in Delhi and most of them were targeted in posh areas. Accused persons further disclosed that mostly they used to target locked houses so that they could carry out their criminal activities with minimum resistance. They would use housebreaking tools/cutters, master keys to loot the valuables and then used flea to West Bengal for a few days. During the last few days, they had intensified their criminal activities to accumulate enough wealth to fly to Gulf country with the intent of setting up their own business.

Jewellery articles worth around Rs 15 Lacs, housebreaking equipment /cutters/tools and master keys, three loaded country-made pistol along with three live cartridges, 20 stolen Android mobile phones and one auto used for committing offences have been recovered from their possession. Further investigation has been initiated as per police.