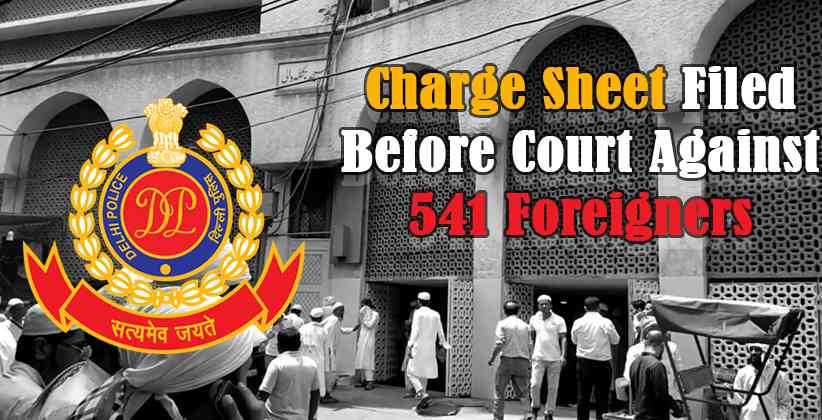 28th May 2020: 12 charge sheets against 541 foreign nationals were filed by the Delhi Police for taking against alleged offender from three countries who had visited the country to attend the Markaz at Nizamuddin in the national capital.

They had apparently violated their visa conditions by indulging in missionary activities illegally and breaching government guidelines which were issued in the wake of the Covid-19 outbreak in the country.

The charge sheets were filed by the police before the Metropolitan Magistrate Archana Beniwal who put up the matter for the same for consideration on 25th June 2020.

The charge sheets further highlighted that all the foreign nationals were being booked for violating visa rules and government guidelines issued in the wake of the Covid-19 pandemic, in line with the regulations under the Epidemic diseases Act, Disaster Management Act, and prohibitory orders under section 144 of Code of Criminal Procedure.

The Central Government has canceled their visas and has officially blacklisted them. However, the foreign nationals have not been arrested yet.

47 charge sheets have been filed against 915 foreign nationals in the case to date.

The 294 foreigners belonged to countries including Malaysia, Thailand, Bangladesh, Nepal, Sri Lanka, and several African nations. Four of the accused were from Afghanistan, seven each from Brazil and China, five from the US, two from Australia, Kazakhstan, Morocco, UK, one each from Ukraine, Egypt, Russia, Jordan, France, Tunisia, Belgium, eight from Algeria, 10 from Saudi Arabia, 14 from Fiji and six each from Sudan and Philippines out of the 82 foreigners who were charged.

In April, COVID-19 cases across the country spiked after hundreds of Tablighi Jamaat members, who had attended religious congregations at the Nizamuddin Markaz event tested positive.

At least 9,000 people, along with the foreign nationals participated inside the religious congregation in Nizamuddin. Later, some of the attendees traveled to various part of the country.

According to police, these foreign nationals had entered India on traveler visas and had participated at the Markaz illegally.

Besides violating the provisions of visa, these overseas nationals also led to a situation wherein an enormously infectious sickness of Covid-19 spread and threatened the lives of the inmates and the general public at large, as per the officials.

The police also stated that more than 900 overseas nationals who were accused in the matter belong to 34 one-of-a-kind international locations and rate sheets are being prepared country-wise, under sections of The Foreigners Act, 1946, The Epidemic Diseases Act,1876, The Disaster Management Act, 2005, and applicable sections of the Indian Penal Code, 1862.

The punishment for various offenses under the said penal provisions level from six months to 8 years of imprisonment.

A FIR was registered against Tablighi Jamaat chief Maulana Saad Kandhalvi and 6 others on March 31 on a complaint of the Station House Officer of Nizamuddin underneath sections of the Epidemic Diseases Act, Disaster Management Act (2005), Foreigners Act and different applicable sections of Indian Penal Code.

Kandhalvi was later booked for culpable homicide not amounting to murder after several the attendees of the religious-based congregation died because of Covid-19, police said.

After being exposed to a huge gathering of individuals in March amid the COVID-19 or coronavirus lockdown, many individuals of Tablighi Jamaat from Markaz Hazrat Nizamuddin had been taken out by the authorities and lodged in specific quarantine centers in Delhi. Some of them were also sent to the centers a few days later after being detained from numerous mosques.