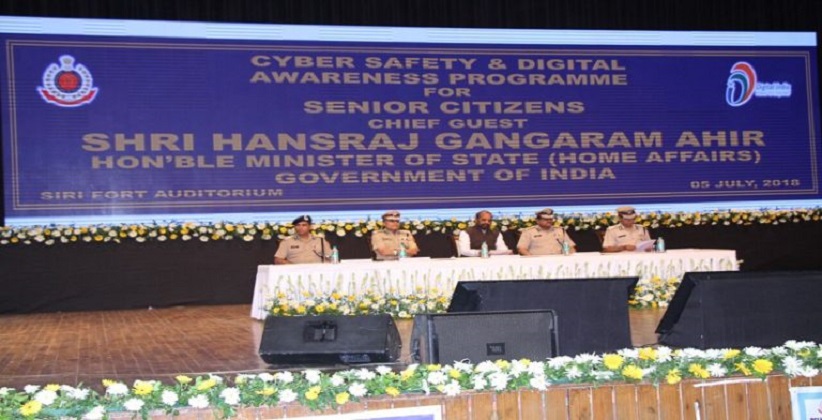 To prevent the growing cybercrime cases against the elderly and to create awareness of such crimes, the Delhi Police organized a seminar on ‘Cyber Safety and Digital awareness programme for senior citizens’ on July 05, 2018 in New Delhi. About 2500 senior citizens from different parts of Delhi participated in this programme.

Minister of State (Home Affairs) Hansraj Gangaram Ahir was the Chief Guest of the program along with Commissioner of Police, Delhi, Amulya Patnaik. On this occasion, Gangaram Ahir said that to prevent cybercrime, a forensic lab will be created in every state at a cost of 100 crores and an online portal will be launched where people can file complaints regarding cybercrimes. He also flagged off the start of first Cyber Forensic Van of Delhi Police.

Earlier criminals used to commit crimes such as theft, snatching, and robbery but today the miscreants are looting people through the internet. Now online money transactions are being done profusely through the facility of internet resulting in an increase of cybercrime cases, especially against the senior citizens.

Keeping this in mind, Delhi Police organized this cybersecurity program for the senior citizens of Delhi. Through this program, knowledge was imparted as to how online fraudulent activities could be prevented while doing online transactions.

While addressing the people, Hansraj Gangaram Ahir said, "We have assembled here to take the responsibility of providing a better security to all the people from cyber crimes. This program has been initiated in Delhi, the capital of India, so it will leave a message to the whole nation in formulating such programs in their states too. Narendra Modi said after becoming the Prime Minister that I want the people of India secured along with the secured borders. And this programme is one of the proofs of safeguarding the citizens of India. I am amused to see the huge gathering of senior citizens attending this program which is a proof of trust you have placed in Delhi Police."

Commissioner of Police, Delhi, Amulya Patnaik said, "In this digital age our country is going ahead, though at the same time cyber cheating has also increased as the online transactions and payments are increasing. In all 14 districts under Delhi Police to handle cyber crime, we have made cyber units with our best officers to resolve in cyber crimes.
Today a cyber- forensic van has also been launched by Hansraj Gangaram Ahir. If any complaint is received comes so the investigating officer on duty will send the van to the place of incident to provide direct assistance to the IO in the particular case without wasting anytime. For now, we have launched one van but soon we will bring more such vehicles."