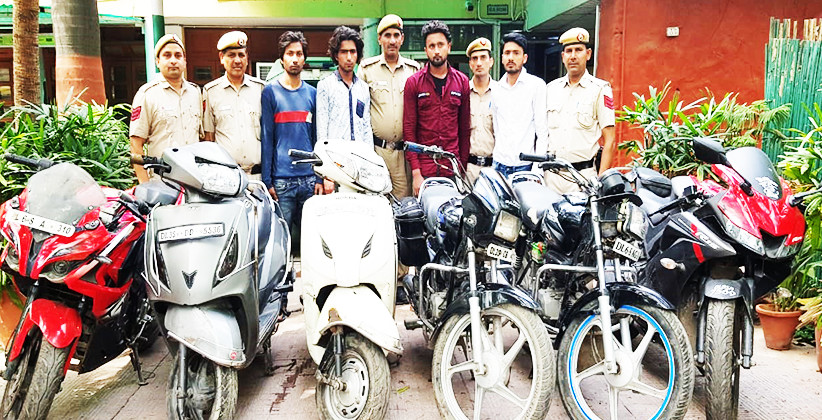 With the arrest of 6 members of an auto-lifter gang, the police claim to have solved 13 cases of auto-theft and recovered from them 8 bikes, 2 scooters and one mobile tablet. The arrest came by the staff of Hazrat Nizamuddin and Special Task Force (STF) of South-East District at two different locations.

Keeping in view the gravity of the crime a team comprising ASI Ashok Kumar HC Satender and others led by SHO inspector Satender Mohan under the supervision of Birjinder Singh ACP sub-division Lajpat Nagar was constituted.

The police team gathered information about some persons involved in stealing the bikes from Delhi and the NCRs. The said information was further developed and a trap was laid by erecting a picket near the Neela Gumbad roundabout on Zakir Hussain Marg. The cops on alert for the suspects flagged down two motorcycles coming from the DPS Mathura Road side and the 4 persons were sitting on these bikes. The staff immediately closed the barricades and signalled the riders to stop. The riders tried to reverse so as to get away from getting caught but Head Constable Satender and Constable Amit caught one motorcycle rider and the pillion rider whereas another motorcycle rider and pillion rider were caught by ASI Ashok Kumar and constable Bajrang. All four were overpowered by the staff before they could flee.

On the other hand, the STF arrested 2 auto-lifters and recovered 4 bikes and 1 mobile tablet. The team led by Inspector Mukesh Moga, Incharge/STF with ASI Kripal, HC Sharwan, HC Anil Kumar, HC Mahesh Chauhan and others was constituted under the supervision of Jagdish Yadav, ACP Operations.

The team gathered information about auto-lifters and laid a trap at Okhla Estate road, near Crown Plaza Hotel. 2 persons were seen coming on a black Appache Motorcycle from Govind Puri to Crown Plaza Hotel side. The police staff intercepted the motorcycle and nabbed the persons identified as Imran alias Irfan alias Rafiq 26 years and Ram Keshav 25 years. The said motorcycle was found stolen from the area of PS Govind Puri vide E.FIR NO.12291/19 under Section 379 of the Indian Penal Code, 1860. Accused were arrested under Section 41(1)(d) of Code of Criminal Procedure, 1973, and recovered bike was duly seized. At the instance of the accused, 4 stolen motorcycles and one stolen mobile tablet was recovered. Both the accused persons were previously arrested in several cases and in order to meet their needs of drinking and smoking, they took to the crime.