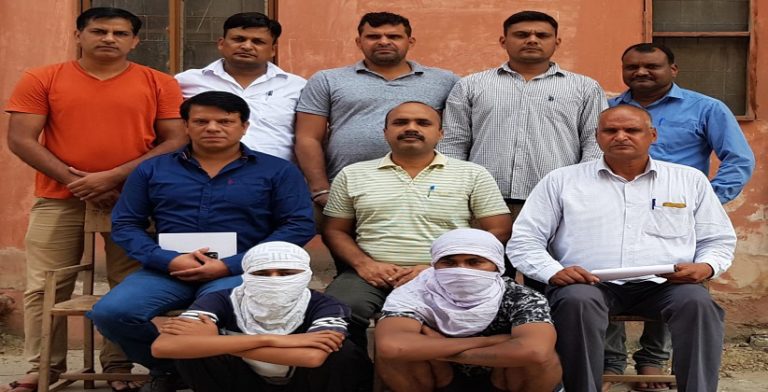 A Delhi police team of Special Staff under Dwarka District has arrested two accused persons, who were involved in cases of auto-thefts and snatchings. However, they had a different strategy wherein they used dangerous stunt skills in snatchings and disappeared within seconds after committing the crime.

In view of ensuing Independence Day, Special Staff of Police of Dwarka district intensified its ongoing crime curbing exercise which started in view of the recent incident of auto-thefts/snatchings during the last few months. Traps were laid at several places during the drive and secret informers were deployed with specific briefings about the offenders. Surveillance was also put up at multiple places and several persons were interrogated to get leads.

On Aug12, 2018, a checking point was established at Vipin Garden, Uttam Nagar to verify the suspected criminals and vehicles. At about 9:00pm, two men on a black pulsar motorcycle were flagged to stop for checking, but they tried to flee while driving dangerously to evade police. However, the suspects were overpowered, controlled and interrogated. During interrogation, they were identified as Yugant Shivani alias Hero aged 18 years and other Sahib alias Rider aged 22 years. Vehicle in their possession was found to be stolen vide e-FIR No. 025203/18, dated 20.07.18 under Sec 379 IPC PS Sagarpur.

As per police, two more motorcycles were also recovered on their instance which had also been used by them in snatchings. Both criminals were in habit of performing dangerous stunts on their motorcycles after committing the heinous crimes. Both accused were arrested vide  u/s 41(1) (d)CrPC, dated Aug12, 2018 by Special Staff of Police of Dwarka District. Ten cases of snatchings/auto-theft were worked out.  Both were found members of a prominent bike stuntmen group.

During further interrogation, it was found that Yugant alias Hero is fond of bikes and wanted to own a bike and perform stunts as performed in the Bollywood movie “Dhoom” .  He met Sahib alias Rider as both were members of a prominent bike stuntmen group. Both were in need of quick and easy money. Both started committing auto-thefts and snatchings in the area and used their riding/stunt skills to scare the victims. Till the time the victim understands what has happened, they flee from the scene. Other accused Sahib aliasRider had been arrested several times as he was found to be involved in at least 21 cases of snatchings and auto-thefts and remained in Tihar Jail at different times before coming out of jail in Feb, 2018.

Both of them were fascinated with bollywood action stunts and were dreaming of being known as bollywood stuntmen. However, they took the wrong route to fulfil their dream by performing  stunts for snatching to earn quick and easy money.