It Is Illegal to Circulate E-Paper PDFs on WhatsApp Groups: INS 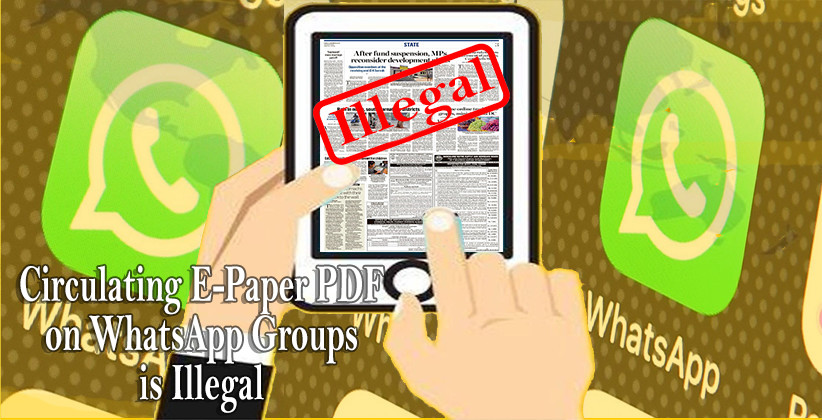 Crime, Police And Law May 06, 2020 Aarya Mishra ( Editor: Ekta Joshi ) 153 Shares
153 Shares
The ongoing Lockdown has posed a new challenge in the distribution of newspapers. The alarming increase of E-Paper piracy has caused a downfall in the revenue of local and national newspaper houses. With more and more citizens escorting to making PDF versions of news articles and distributin them on social media platforms (such as WhatsApp), a negative impact has been caused on the sale and subscription to physical newspaper copies.

In light of such instances, the Indian Newspaper Society (INS) has now warned that the circulation of E-paper PDFs on virtual platforms such as WhatsApp and telegram groups will be termed as illegal. The concern, in particular, is regarding PDFs created by copying e-papers and the plagiarized copies thereafter being pushed on social media to help the aggregators.

This is affecting business, particularly if the e-paper is a paid service, says INS president Shailesh Gupta. "It is okay to forward PDF files which are free, but it is not okay to copy a PDF from a paid e-paper service and forward it. Basically, the move is targeted towards aggregators who are trying to increase their sales in an unsolicited manner, it is piracy," Gupta added. As per Gupta, the instant messaging app -Telegram is also one such aggregator, which is under the scanner. Further, it is a matter of concern where people circulate such clippings or news pieces after downloading them as this could lead to the spread of misinformation since PDFs can be edited and the content be warped.   Bahubali S Shah of Gujarati daily "Gujarat Samachar", further added, "Due to lockdown, people are facing problems in accessing newspapers. This is why we are not taking any immediate action and letting people read more e-papers. But we will sit and discuss legal options on how to stop such malpractices from affecting the industry." As per the clarification, if a media house gives free PDFs of e-paper, then circulating them is not illegal. But if someone makes a copy of the e-paper or a portion of it and circulates it on Telegram and WhatsApp, then it amounts to an illegal act. It is also noted that in case such activity takes place, the group admin would be held solely liable.  The INS said that they are currently implementing technology which can help them determine the name of the person circulating such PDFs, if multiple illegal downloads come to the notice of the organization.  The INS’s move is essential to prevent the spread of misinformation, especially in the sensitive times of COVID-19.