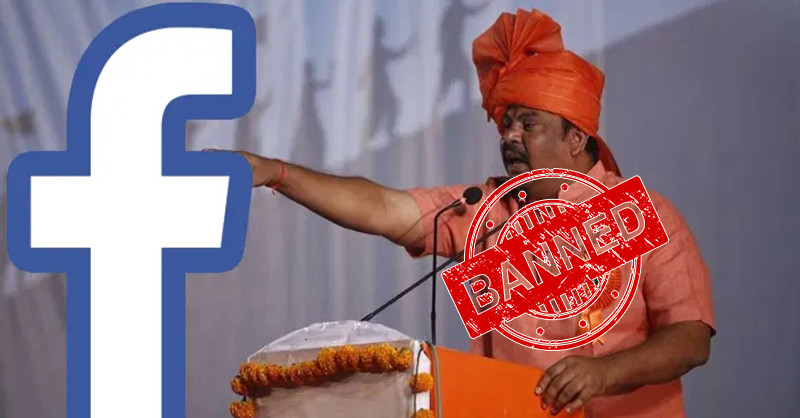 Social media giant Facebook bans BJPs T Raja Singh, MLA from Telangana, on Thursday for violating Facebook’s policy against hate speech. Facebook banned the legislature from Instagram too. The politician has been registered on Facebook under the category of “dangerous individuals and organizations policy” and will not be allowed to maintain a presence on the platform. The BJP legislature will not be allowed on Facebook as well as on its short video and photo-sharing platform Instagram. The company also removed Pages, Groups, and accounts set up to support him or to represent him. The official statement issued by Facebook’s spokesperson read that “We have banned Raja Singh from Facebook for violating our policy prohibiting those that promote or engage in violence and hate from having a presence on our platform”.

Amit Malviya (head BJP IT cell) did not comment on the specific case of banning Raja but he opined that determination of the hate speech should be done while keeping rules and laws of the land. Malviya said “What constitutes hate speech in India will be decided by our constitutional framework and extant rules. It must be applied fairly to all irrespective of their political affiliation. Sonia Gandhi, whose divisive speech streamed live on Facebook, which leads to wide-scale rioting, death, and destruction in Delhi recently, is equally guilty as is someone else. We can’t have double standards”.

Defending himself and answering to allegations T Raja Singh claimed in a video on Twitter last month that he doesn’t have any page on Facebook or any official Facebook page he said that “I have got to know many FB pages are using my name. Let me clarify I’m not having any official page, I’m not responsible for any of their posts”. He also added that his official Facebook account has been “hacked and blocked in 2018”, and that he is been treated in a way that he is the most dangerous man in the entire world.

Singh came into a wider focus after the Wall Street Journal newspaper reported in the month of August that his account was not suspended despite being marked as “dangerous” for spreading hate for a minority community. Facebook India’s public policy head Ankhi Das allegedly opposed his ban saying it would impact the company’s “business interest” in India, the social media company’s biggest market in terms of the number of users.

Facebook’s official also appeared before a parliamentary panel led by Congress MP Shashi Tharoor and faced questions on the alleged political bias from both sides of the divide.

Congress, left-front parties, and other opposition parties, from time-to-time, have alleged that social media shows a positive bias towards BJP; they even sited the WSJ report to support their claims. Congress even wrote to Mark Zuckerberg twice complaining of the issue and asked him to specify the steps being taken to investigate the charges against its Indian unit.

IT Minister Ravi Shankar Prasad said that he had also written to the social media giant accusing their employees of supporting people from a political predisposition that lost successive elections, and “abusing” cabinet ministers and the Prime Minister Sri. Narendra Modi.