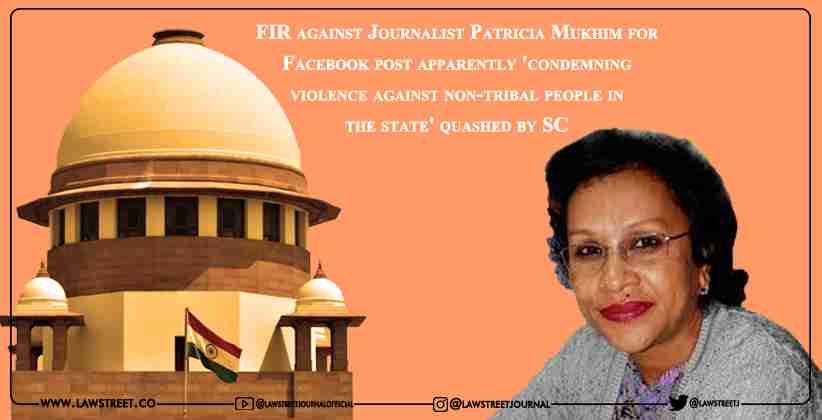 Crime, Police And Law Apr 01, 2021 Namya Bose ( Editor: Ekta Joshi ) 4 Shares
4 Shares
The Supreme Court last Thursday (March 25, 2021) quashed an FIR complaint which was made against Patricia Mukhim for a Facebook post which was supposedly seen as “condemning violence against non-tribal people in the state”.

The accused is an Editor at Shillong Times. Justices L Nageswara Rao & Ravindra Bhat heading the bench, allowed the appeal made by Patricia which challenged the Meghalaya High Court which had thrown out the request of the dismissing the FIR against her.

The plea made by the accused to quash the FIR complaint to end all criminal proceedings was rejected in November of last year. The Court believed that the offence of mischief under section 153 of IPC was made and the post was considered “to promote disharmony or feelings of enmity, hatred or ill-will between 2 communities”.

Her post sought action by the state for some action that took place against a few non-tribals which let to the village council to filing an FIR against Patricia on July 6,2020. The FIR held her responsible for “inciting communal tensions & for defamation.” The attack referred to in the matter was to do with a violent attack that took place on July 3 of 2020  in a basketball court in Lawsohtun area on a group of 20 young boys who were non-tribal. Patricia posted on July 4 saying the state of Meghalaya had failed as a state because such attacks still continue to take place.

Patricia claimed that she was being prosecuted for telling the truth and wanting enforcement of the rule of law. She wrote in her plea that the post to “appeal for impartial enforcement of rule of law; equal treatment before the law of all citizens; condemnation of targeted violence against members of a minority group; an end to impunity for violence and thereby ensure peace & harmony between communities & groups.”

The Supreme Court recently quashed the FIR against Patricia, allowing her request.