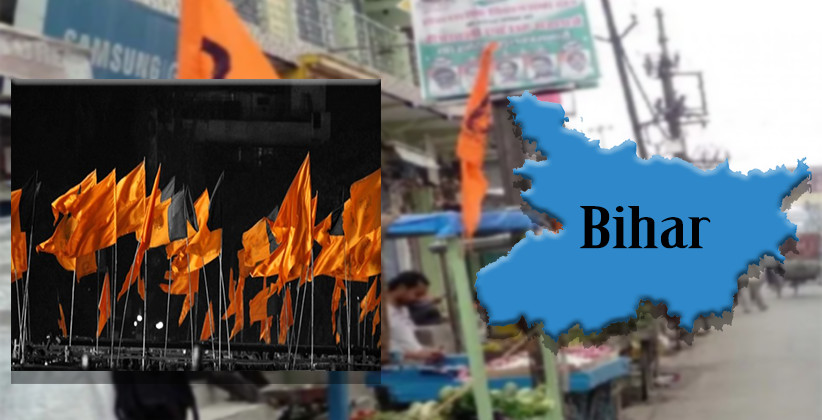 An FIR was recently lodged against certain shop owners in Nalanda, Bihar for sporting saffron flags on their shops with an attempt to display communal bias.The action was taken after a block officer named Rajiv Ranjan reached out to the Laheri Police station in Biharsharif on 20, April 2020 alleging that the acts incite rioting and cause disturbance to communal harmony.

The complainant stated that, by hoisting the said flags, the local Bajrang Dal members are urging Hindus in the area to buy essential commodities such as fruits, vegetables, and ration from shops that have sported saffron flags or are run by other Hindus. He further accused a Twitter user (@RahulPrince1432) of asking people to sport saffron flags and of uploading several pictures of such Hindu shops on his handle, along with 5 unidentified persons.

The application specifically pointed out names of  two ‘Bajrang Dal members’ who were responsible for the above-stated acts, namely Kundan Kumar and Dheeraj Kumar. As confirmed by Station House Officer (SHO) Ranjit Rai from the Laheri Police Station, they were booked under Indian Penal Code, 1860 sections 147, 149, 188, 153A, 295A and Section 66 of the Information Technology Act, 2000 along with the person using the Twitter ID and the five unidentified persons.

In a similar incident, certain fruit sellers in Jharkhand were booked by the city police on April 25, 2020 for writing slogans displaying an overt manifestation of religion outside their shops. A FIR was lodged against them after a Twitter user – Ahsan Razi highlighted the matter to the concerned authorities.