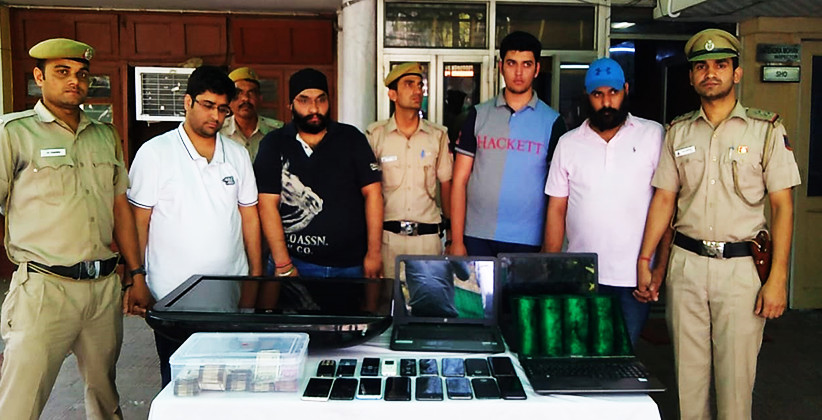 Bookies were booked under PS Hazrat Nizamuddin when the cops raided a Delhi hotel and cornered the punters with cash and cellphones. The PS of Hazrat Nizamuddin has held four betters operating from a hotel room in Delhi and recovered 3 laptops, 17 mobile phones, TV set and a cash amount of Rs 5, 15,000. Those arrested identified as Harish Arora 31 years, Nav Karan Singh 25 years, Ashish Mangal 21 years and Gurbej Chhabra 36 years.

They had been running the betting racket during the ongoing Indian Premier League (IPL). They were caught red-handed betting on Chennai Super Kings and Kolkata Knight Riders match being played at Chennai.

SI Rajender Singh gathered information about a betting racket linked to the Indian Premier League. The said information was further developed and a team led by SHO inspector Satender Mohan with SI Rajender Singh, HC Jai Kishan and others was constituted under the supervision of Birjinder Singh, ACP sub-division Lajpat Nagar.

The police team without wasting a minute further rushed to Preet Palace Hotel at Jangpura. When the cops raided room number 307 of the hotel, 4 persons were watching the match on television and updating the rates, win and loss record through the mobile phones. They were using one phone for obtaining on-line rates and other phones for passing on information to the punters and seeking bets. A case vide FIR No. 90/19, dated 10/4/2019, under Sections 3, 4 and 5 of the Delhi Public Gambling Act, 1955, was registered and investigation was taken up.

"During sustained interrogation, the accused disclosed that in order to make a fast buck, they all planned to run a betting racket during the IPL. Accused Gurbhej Chabbra was well-versed in this system of betting and was previously arrested in a gambling case in 2007. The modus operandi employed by them was to book a hotel room during the IPL match and operate from there," DCP south-east Chinmoy Biswal said.

The bookies used to take bets from their clients and were using betting assistant I-Book software on their laptops that kept a record of those placing bets and the financial transactions.

Accused Gurbej Chhabra @ Ashu was previously arrested in FIR No. 539/2007 under Sections 3 and 4 of the Delhi Public Gambling Act, 1955, PS Hazrat Nizamuddin. He has studied up to 10th standard. His family is running a restaurant/dhaba in Jangpura Extension. Accused Harish Arora studied up to 12th standard. He is a property dealer at Jangpura, Delhi. Accused Nav Karan Singh is an engineer from IP University and running a paint and hardware shop in Govind Puri. Accused Ashish Mangal is a graduate and unemployed. His brother in law is dealing in the business of steels. He is learning professional skills with his brother in law. "The case has been registered and probe is on to track other links. More arrests are likely on days to come," Biswal concluded briefing the press.