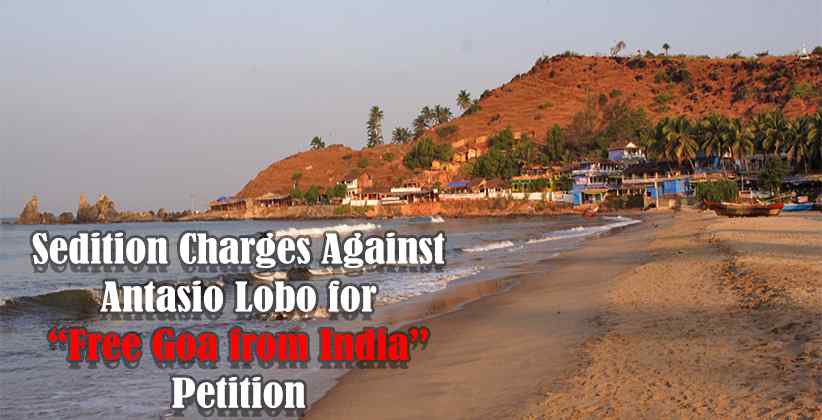 The president of NGO - Revolutionary Indians, Nitin Patkaro filed a FIR against Atnasio Lobo, who had previously filed an online petition seeking Goa to be a free Country.

Antasio Lobo, a self-proclaimed freedom fighter who lives in Canada, had filed an online petition which will be addressed to UNGA to conciliate and get India to ‘Withdraw Forces’ from Goa.

The online petition reads as-

“We, the indigenous people of Goa known as “Goans” from the Goa Territory of “Estado da India” displaced Goans from outside Goa, Goans living in exile in other foreign countries; Goan allies and sympathizing citizens of the world; hereby prayerfully petition the United Nation General Assembly and state that: The petitioners appeal to the current members of the United Nations General Assembly (UNGA) to review the subject matter of this petition with a fresh perspective as the conscience keepers of world peace. Goa might not have attained sovereignty but that right does not lapse, a right that cannot be assumed by others, a right which is inherent to people. In this case, the right belongs to the Goans and has to be exercised consciously and freely within the framework established by the United Nations Charter”.

The Goa Crime Branch Police has booked this man on charges of Sedition, section 124A IPC after an online plea demanding to free Goa from “Indian invasions and illegal occupations”.

No Support for the Online Petition

On 11th May 2020, Antasio Lobo updated about the progress of his online petition via his twitter account. Hours after the update he closed the petition stating that despite two years, the petition did not garner even 5,000 signatures. He also stated that his petition was subjected to a lot of false claims, though he did not mention the charges of sedition which have been filed against him.

According to the reports, the complaint was registered by the President of NGO - Revolutionary Indians, Nitin Patkaro at the Mapusa Police Station, Goa against Antasio Lobo, and the other signatories for attempting to break the unity and integrity of the nations by stating that Goa is not part of the Country.

Nitin Patkaro in his statement said that he is filling an FIR against Antasio Lobo under Sedition charges mentioned under Section 124A of IPC for an online petition asking Goa to be a free country, under the caption - “Free Goa from India Invasion and its illegal occupation against “United Nations Revolution”, thus attempted to animate disloyalty towards the Government established law of India.

The online petition was signed by 4,200 people and was spreading aggressively.

Patkaro claimed that people like Antasio Lobo are anti-Nationals and have no right to demand Goa to be a separate Country. He further said no matter what, he will always fight against any separatists.