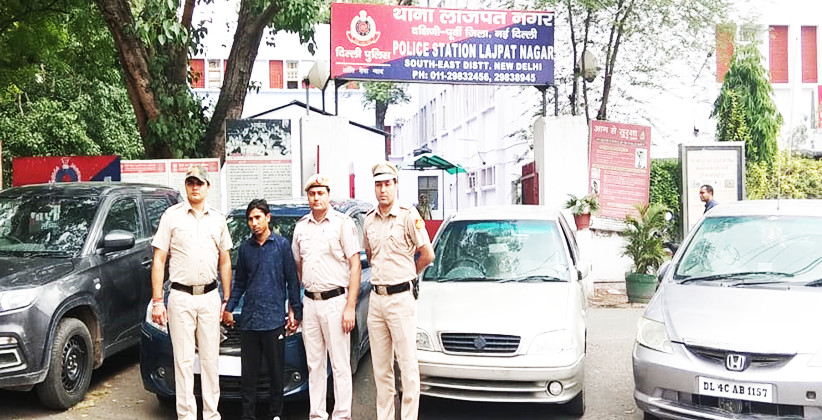 The staff on the alert of PS Lajpat Nagar, South-East District has busted a notorious gang of auto-lifters and arrested 2 auto-lifters identified as Ravi 23 years and Mehtab alias Honey 28 years. The police also recovered from their possession 4 stolen cars.

On a complaint lodged at police station stated the theft of a Maruti Baleno car with registration number HR26DS1261, it was lifted from outside the house of the complainant at Lajpat Nagar

The police swung into action and a team comprising SI Anuj and others led by SHO Lajpat Nagar inspector Pankaj Malik under the supervision of Birjinder Singh ACP Lajpat Nagar was formed.

"We came to know that GPS device was installed in the stolen Baleno car, on the basis of the GPS the location detected in Sahibabad. The police team reached the spot and found the car parked unabandoned. The police team in civvies laid a trap near the recovered car and kept waiting for the accused. After a long constant watch, a man there came and opened the car. Immediately, the alert raiding party overpowered the suspect identified as Ravi. He, when examined, confessed to the crime," DCP South East district Chinmoy Biswal spoke.

It was revealed that Ravi with his associate Kamruddin worked for one Mehtab. Mehtab is the kingpin of the gang and has previously been arrested in 26 cases of auto-lifting. At his instance, raids were conducted in Delhi NCRs, Panipat and Nainital, consequently, Mehtab was arrested. At his instance, 3 more stolen cars were recovered. Accused Kamruddin was also arrested with a stolen Scorpio car by the SOG team of UP Police.

"The gang carried out a recce of the area before commission of crime. They used to come in another stolen car and parked it next to the parked targeted vehicle. Then they used to open the car and break the lock code with the help of a scanner. The gang used to steal the vehicles on demand and park the stolen cars at Sahibabad. Afterwards, accused Mehtab used to dispose of the vehicle to a receiver by the name Shamim alias Pillay at Meerut," Chinmoy concluded.

Further investigation of the case is underway. ​