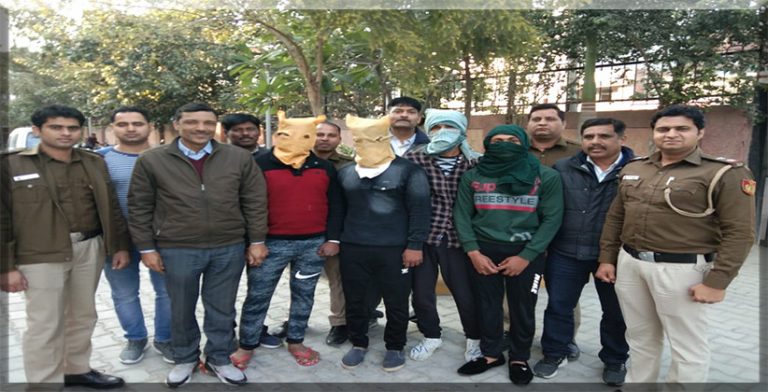 The east district's Special Staff claims to have busted a gang of notorious snatchers operating in the area. The four accused arrested have been identified as Izhar alias Lucky 23 years, Mohammad Khalid 23 years, Mohammad Riaz 22 and Hari Om 27 years. The arrest has helped work out 25 cases of snatching and robbery under various police stations. From their possession, the police recovered 2 motorbikes and 20 expensive mobile phones snatched and robbed by the gang from various places across the district.

As per a complainant's statement the boys came on two motor cycles and asked him about the way to a colony and the pillion rider suddenly tried to snatch his mobile phone. When he resisted, the robbers started thrashing him. When he fell down, they robbed him of his mobile phone and fled the scene.

Special Staff East District was specifically tasked with tracing snatchers and robbers active in the area.

A team of Special staff comprising ASI Sher Singh, HC Talim and HC Kailash under the leadership of inspector Sushil Kumar and close supervision of ACP Operations Rakesh Dixit was constituted. This team used the human intelligence to collect information about such gangs employing similar modus operandi, and also active in the area.

The police on a serious note began tracking, after sustained efforts for two weeks, the police got a specific clue about this gang. The police started zeroing in on them. They were not even found at their homes. The police had to walk a little away chasing their whereabouts and hideouts.

On March 1, 2019, a piece of information too accurate this time, the police acting on a tip-off that the gang would gather at CNG gas station near Ghazipur.

"We developed the lead and a trap was laid near suspected location, four members of this gang on two motor cycles reached there. The police team lying in wait overpowered them,” Jasmeet Singh DCP East spoke.

The accused confessed to having committed the crime when interrogated.

"They are friends, all school dropouts, come from a poor background and addicted to gambling. When the need for money presses them when they actually lost money in the game they resorted to robbing and snatching. The case has been registered and further probe is underway," Singh concluded saying.

The quartet disclosed that they had come here to dispose of snatched mobile phones. The accused revealed that they are involved in a long string of cases of phone snatching.