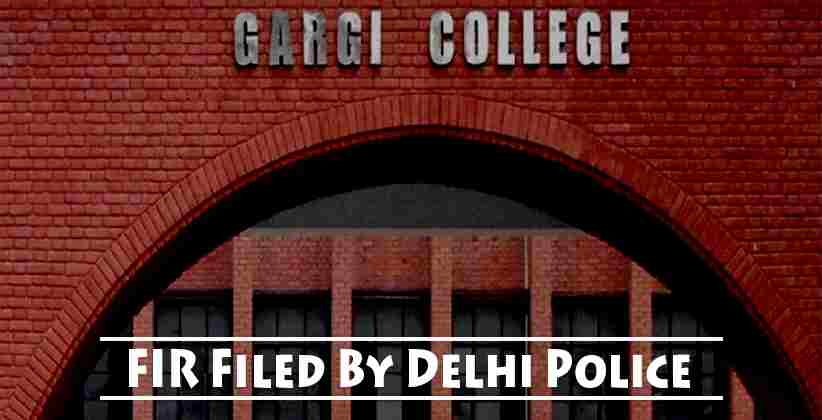 The extreme violent and disordered situation that took place in the Delhi University's Gargi College has witnessed protests raging against the alleged sexual assault on the students by outsiders on the college campus. The outrage during their college festival Reverie that took place on the 6th of February, 2020 has found itself amid a wide echo from students all over, sharing their troubles over issues like these that have haunted the country since long. The issue got raised in the Parliament on 10th February, 2020 (Monday). The issue was raised by Congress MP, Gaurav Gogoi who said that sexual harassment and bullying often takes place in many high educational institutions and strict action should be taken in such incidents.

Reliving the nightmare of men gate-crashing into what the students considered their college, a safe space there was an abysmal administration of the security. Some men jumped over the gates while others jumped over the walls. The students alleged that they were threatened by the intruders who further used derogated remarks and words. It was further put forth that the auto drivers who had parked their vehicles outside the main gate also managed to enter the college campus. Bouncers were hired for security, who just stood there watching the happenings around. And further more the college refused to take cognisance of the whole incident. The men were around in their 30's and even alleged to have performed obscene acts while the Delhi Police personnel and security stood there being the mute spectators.

One student in the Gargi college fest said,'I was groped thrice and those men laughed at me'

"The students were groped, molested and even assaulted by the men. The college claimed to have made security arrangements. I don't think such an incident has taken place on any college campus across the country," she said.

"They were drunk and went berserk. Some girls ran towards washrooms, but the men followed them and locked them inside," she added.

"My friend, who was molested, who rushed to a security guard and pleaded him for help but he did not move," a student said.

"The next day, on 7th February, 2020, we took up the matter with teachers and college management. The management said they had taken note of it. They didn't promise to take any action, after which many students shared their horrific experiences on Instagram," a B.Sc student added.

Soon after the protests aggravated due to lack of actions taken by the administrative authorities in the shocking incident, the college finally had a police complaint filed and further set up an internal inquiry committee to ponder into the matter and speak to the complainants. Further more the Gargi College Principal Promila Kumar said a general body meeting had taken place with the students and the matter was amicably resolved.

The Delhi Commission for Women's chairperson Swati Maliwal reached the college to take stock of the situation. A notice was issued to the college and the Delhi police for the inaction recorded at the festival.

Complaints were registered by the Delhi police on 10th of February, 2020 as hundreds of students began protesting, demanding strict action to be taken against the intruders. According to Atul Kumar Thakur, Deputy Commissioner of Police (South), the case has been registered under the following sections of the Indian Penal Code, 1860 - Section 34 - acts done by several persons in furtherance of common intention, Section 354 -assault or criminal force to woman with intent to outrage her modesty, Section 452 -  house-trespass after preparation for hurt, assault or wrongful restraint, Section 509 - word, gesture or act intended to insult the modesty of a woman. The officer further put forth that the police are scanning the footage of CCTV cameras to collect the evidence and also speaking to the students to ascertain the facts.The case will be investigated by Inspector Pratibha Sharma of the Crime Against Women Cell of South District.  The Delhi units of the Bharatiya Janata Party (BJP) and the Congress have put forth their differences and have unitedly asked the culprits to be arrested at the the earliest.

"What happened at Gargi festival is disgusting! Such festivals are opportunities to celebrate cultural diversity & talent in Delhi. But the obvious anti-social elements saw this festival as another chance to inflict harassment & violence on students!" said Arvind Kejriwal, CM of Delhi.