Hathras Gang-Rape Survivor Dies While Battling for Life in Delhi Hospital, Gets Cremated by Cops in absence of family 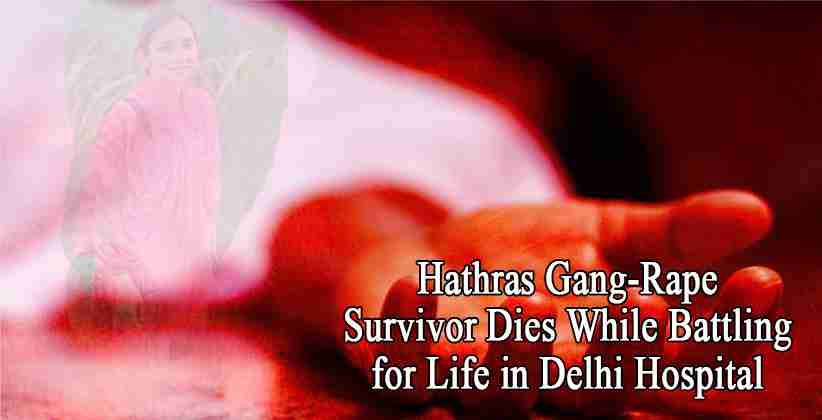 The 19-year old Dalit gang-rape victim from Hathras was taken to Delhi’s Safdarjung Hospital recently. She was transferred from Aligarh’s Jawaharlal Nehru Medical College to Delhi a day earlier. She was kept in the Delhi Hospital to treat her injuries suffered from the horrifying rape case. The victim’s brother confirmed the death and said, “We want justice for her. The accused should not be spared. They must be hanged”

On September 14, the Dalit girl was allegedly raped by four men of the dominant caste from her villages. The facts of the case state that the men dragged the girl by her dupatta draped around her neck. They dragged her to a field where she was allegedly raped. The incident took place when she was picking up fodder. After the incident, her spinal cord was damaged. Her tongue was caught between her teeth and was cut. The rape case was brought to notice after a week of the incident. She gave the statement to the police after a week of hospitalization.

She named all the four men, “Sandip, Ramu, Lavkush, and Ravi”. The four accused have been arrested for the offense of gang rape, attempt to murder, and sections of The Scheduled Castes And The Scheduled Tribes Act, 1989.

Section 376 D of the Indian Penal Code,1860 prescribes punishment for gang rape as, “Where a woman is raped by one or more persons constituting a group or acting in furtherance of a common intention, each of those persons1 shall be deemed to have committed the offense of rape and shall be punished with rigorous imprisonment for a term which shall not be less than twenty years, but which may extend to life which shall mean imprisonment for the remainder of that person’s natural life, and with fine”.

Section 307 prescribes of the Indian Penal Code, 1860 prescribes punishment for attempt to murder as, “Attempt to murder.—Whoever does any act with such intention or knowledge, and under such circumstances that, if he by that act caused death, he would be guilty of murder, shall be punished with imprisonment of either description for a term which may extend to ten years, and shall also be liable to fine; and if the hurt is caused to any person by such act, the offender shall be liable either to 1[imprisonment for life] or to such punishment as is hereinbefore mentioned.”

The Hathras additional superintendent of police, Prakash Kumar has also stated that Section 302, Indian Penal Code,1860 that prescribes the punishment for murder will also be added in the FIR since the victim has been found dead.

Body of Victim cremated by Cops, Family not allowed to see her one last time:

The body of the woman was taken to her village after midnight. Affirming the suspicion of her relatives, the UP Police wanted to complete her last rites there. They did not hear the pleas of the woman’s father who constantly repeated that this was “against their tradition”. The father pleaded for them to be allowed to take their daughter home.

“We wanted the last rites to be performed according to the Hindu traditions. Despite our protests, the cremation was performed. They took the body forcefully. We couldn't see our daughter's face for the last time," the woman's father told NDTV.

The vehicle was attempted to be stopped by the female relatives. The mother of the victim allegedly sat on the road as she continued to sob and beat her chest. Even though the police vehicle was stopped at various points, the cops continued to push the protesters and continued to drive towards the funeral ground.

“Continuing their inexplicable acts, the Hathras police formed a human chain to keep reporters, the family, and villagers away. Only cops were present. Her family could not see her one last time. They were allegedly locked up at home.

Amid spiraling outrage, the Hathras police claimed the cremation was carried out with the family's consent and some members were present. It turned out to be one uncle - not her parents - who were called and shown the cremation.”