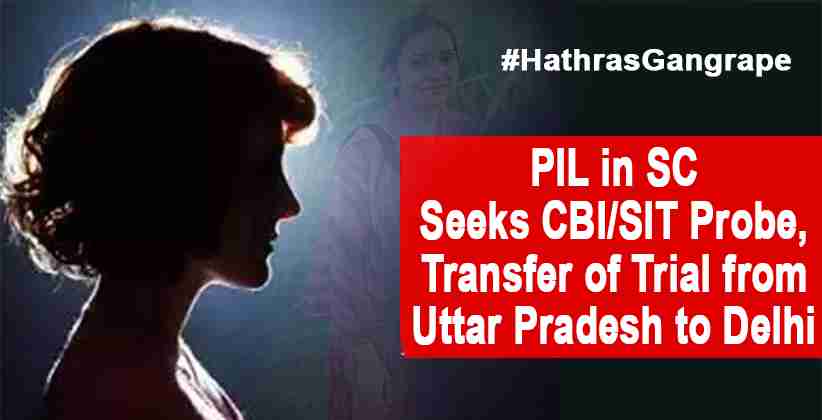 A plea has been filed before the Supreme Court seeking for an investigation into the brutal Hathras rape and murder of a 19-year-old Dalit woman who died in Delhi on Tuesday (September 29, 2020) two weeks after she was gang-raped and tortured, there was blood flowing out of her mouth when the mother of the rape victim found her naked body in the fields on September 14 allegedly by four upper-caste men by either the Central Bureau of Investigation or a Special Investigation Team.

The plea further seeks for the transfer of the matter from Uttar Pradesh to Delhi alleging failure of the State Government to take action against the accused persons.

As per news reports, on September 14, a 19-year-old Dalit woman was abducted and then gang-raped by four upper-caste men who then subjected her to brutal torture by breaking her bones and cutting off her tongue. She passed away on Tuesday, the 29th of September, and was cremated by police officials in the middle of the night without the consent of her family.

It is submitted in the petition, filed by Advocate Sanjeev Malhotra on behalf of social activist Satyama Dubey, that the statement of the police that the cremation was carried out as per the wishes of the family is false as "the police personnel himself buried the dead body of the deceased even media personnel has also been banned as per the information received (sic)".

The plea underlines the issue that the police authorities have not performed their duties and are shielding the accused. Additionally, the family of the victim is being victimized by upper-caste persons. The plea contends that the "Petitioner herein is demanding justice for the victim for the brutal attack, rape, and murder of the victim".

In view of the same, it seeks directions to the Union of India and other concerned authorities for a fair investigation and to transfer the same to CBI or to form an SIT under a sitting or retired Judge of the Supreme Court/High Court.

Lastly, it prays for the transfer of the trial from Hathras, Uttar Pradesh to Delhi, and for an order for a speedy trial.