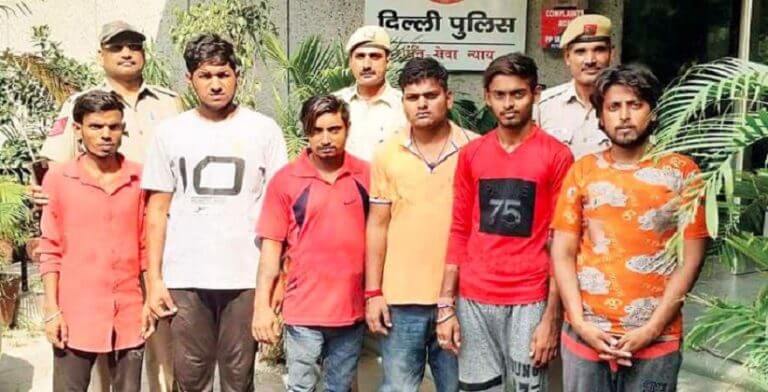 In a major breakthrough after the arrest of first accused Rahul alias Billa, the team of Special Staff under West District police has succeeded in arresting a gang of nine hooligans including four juveniles under the guise of Kanwariyas, who vandalized an I-10 Car on August 7th, 2018 during the Kanwar Yatra 2018.

On August 7th an incident of hooliganism by Kanwariyas was reported at Moti Nagar area wherein a group of Kanwariyas had attacked an I-10 car with sticks & stones, smashing its windscreens and windows before tipping it over on the road triggering a massive traffic jam. The car had reportedly brushed past one of the Kanwaria which infuriated him. Thereafter, he provoked his fellow Kanwariyas on the pretext of falling holy water from Kanwar that they all created ruckus resulting in the wrecking of the car.

Keeping in view the severity of crime and manner in which the hooligans had created a ruckus, a joint team of the Special Staff/West under the leadership of Inspr. Jai Prakash I/C Special Staff/West was formed to nab the perpetrators. The mobile phone footages were extensively scanned and the grabs were circulated to informers as well as locals to identify the people involved in the incident. Resultantly, the team succeeded in identifying one accused namely Rahul alias Billa who got subsequently arrested on August 9th, 2018.

After that, to nab the remaining culprits involved, the team collected information about all Kanwar Camps on route from Moti Nagar to Najafgarh area and later physically contacted all the organizers and their workers. Their entry registers were obtained and around one thousand pilgrims who had stayed at these camps. All SHOs and beat staff under the jurisdiction from Moti Nagar to Najafgarh were also briefed and sensitized to help in identification of accused persons.

The hard work bore fruits and an information was received to the team of special staff that one of the accused wearing black T-Shirt, who is hitting the car with a bat in the video is Yogesh and the other one wearing a white vest is Vishal alias Dabla. On this tip-off, the above-formed team swung into action and apprehended both the accused. Further, three more accused involved in the horrendous act along with four juveniles have been apprehended from the Najafgarh area.