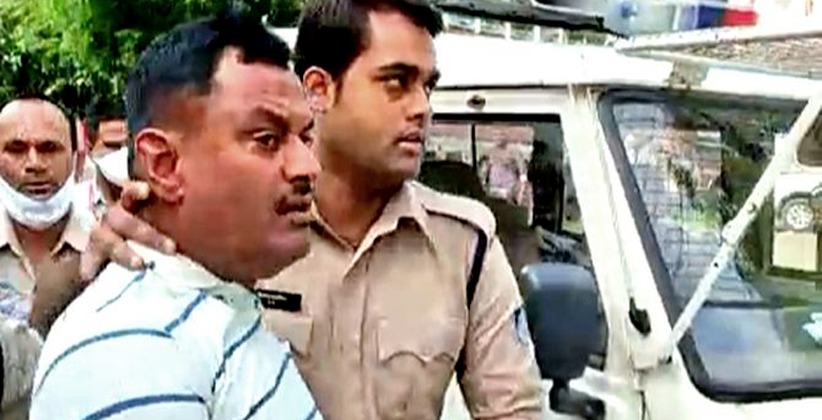 The Gangster of Kanpur ambush Vikas Dubey got arrested on Thursday, 9th July 2020 at Ujjain by the Madhya Pradesh police personnel. Vikas Dubey was going to Mahakaal temple where he was identified by the security personnel and turned to the police.

According to the reports, the temple officials admitted that Vikas Dubey disclosed his name at the counter where he was giving money for donation and then asked them to inform the police.

Madhya Pradesh Home Minister Narottam Mishra said the police were informed of his arrival at the temple by intelligence agencies. A video clip showed Dubey being held by his collar by the police, as he shouted, “Haan main Vikas Dubey hoon Kanpur wala” (Yes I am Vikas Dubey from Kanpur).

Dubey did not try to escape from custody nor was he armed as carrying weapons was prohibited inside the temple complex.

Mishra informed reporters that Dubey was in state police custody in Ujjain.

The Minister however did not confirm if the dreaded gangster who was carrying a reward of Rs 5 Lakh on information leading to his arrest, was nabbed from within or outside the Mahakaal temple premises.

Earlier, two aides of Dubey were gunned down in a separate encounter in Uttar Pradesh. While Kartikeya alias Prabhat was killed in Kanpur while he tried to flee from police custody, Praveen alias Bauwa Dubey was shot dead in Etawah, as per police reports.

Commenting on the matter, the Chief Minister of Madhya Pradesh said that his Government will not spare any criminal.

He further tweeted in Hindi saying, “Those who thought by seeking refuge in Mahakaal, they will be able to wash off their sins, they never really understood Mahakaal.”

Samajwadi Party leader Akhilesh Yadav also tweeted on the matter in Hindi saying, “I hear that the main accused in the Kanpur case is under police custody. If this is true, then the government should clarify, if this was surrender or an arrest. Also, the CDR of his mobile phone should be made public so that information on collusion can be exposed.”

A nationwide manhunt was launched when Dubey killed 8 cops.

The Bahraich police were on the lookout at Indo-Nepal border areas amid intelligence inputs that gangster Dubey may escape to the neighboring country.

On Wednesday, 1st July 2020 the Haryana police had arrested three alleged compliances of Vikas Dubey at a raid at Faridabad house, which Dubey had left a few hours ago according to the officials.

Earlier, eight Uttar Pradesh police personnel along with Deputy Superintendent of police were killed and seven others were injured in a firefight in Kanpur on the intervening night of July 2 and July 3.

Earlier further, Amar Dubey was killed in Hamirpur on Wednesday i.e 1st July 2020 while Prem Prakash Pandey and Atul Dubey were gunned down in an encounter on 3rd July 2020.